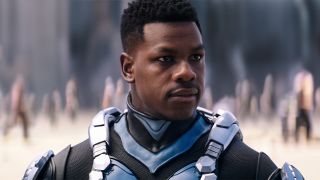 It looks like all those claims about apocalypses being cancelled were premature. The brave men, women and giant robots [aka Jaegers] of the Pan Pacific Defense League may have sealed the breach between dimensions that brought city- crushing Kaiju to planet Earth en masse, but it seems you can’t keep a good (or bad) monster down. A decade has passed since the events of the first Pacific Rim, and in follow-up Uprising, there’s something stirring in the ocean once more…

“It’s been 10 years since the end of the first movie where the breach was closed, and there hasn’t been a peep out of the Precursors, the aliens on the other side of the breach, or the Kaiju,” confirms Uprising writer/director Steven S DeKnight. “Humanity has been preparing for another attack by rebuilding the Jaeger programme from the ground up as everybody believes that more than likely there will be another attack – it’s just nothing’s happened yet...”

“The challenge is that the Precursors didn’t stop brainstorming, even though they were defeated in the first film,” adds John Boyega, the franchise’s new star. “They’ve come up with another way [to attack].

“Most people live and survive day-by-day with no thought of where the Kaiju come from or if they’re going to come back. The shadow of the past is still apparently there, but if you have enough money and opportunity, you have the chance to live away from that. So cities have been rebuilt, a system has come back. You find the world in a state of comfort. But of course that all changes...”

Change was also afoot behind the camera, where scheduling conflicts meant that Pacific Rim creator and director Guillermo del Toro opted to go off and direct awards darling The Shape of Water instead.

“I’m grateful purely from a fan point of view that he didn’t postpone The Shape Of Water,” DeKnight laughs, “because it’s such a gorgeous movie.”

That left the shot-calling vacancy that DeKnight subsequently filled. While Uprising marks his debut as a movie director, he has plenty of experience in TV, as a regular writer in the Whedonverse, and showrunner of both Spartacus and the brilliant first season of Daredevil. And of course, he had the producing del Toro on speed dial if he needed him.

“He’s just the sweetest guy in the world, and he was 110% supportive,” says DeKnight. “He told me early on, ‘Look, if you ever need me, call me. Otherwise take the movie, make it your own, I’m going to stay out of your hair.’ And he’s a man true to his word.”

DeKnight realised his follow-up required three key elements to work. Bringing back Jaegers and Kaiju was effectively a no-brainer, as was the “drift”, the psychological connection shared between two or more Jaeger co-pilots – essential because mental stress of driving one would be too much for a single brain to handle.

“I approached it very much in breaking a story the way we do it in television,” he continues. “I put together a team of writers for two weeks, and I came into it knowing a basic layout. When I was first approached about doing this movie, I went back, I watched the first one, I listened to everything the executives had to say about what they were looking for in this next chapter and it fell together pretty quickly. The idea was always to take the first movie as a jumping-off point, and expand the mythology and the universe with the idea that if enough people show up for this one, we have a firm idea of what the next one will be.”

Then, another of those pesky “scheduling conflicts” struck the film. Charlie Hunnam, who played lead Jaeger pilot Raleigh Becket in Pacific Rim, was all set to reprise the role. But within 48 hours of DeKnight finishing the script – before Hunnam had even had the chance to read it, in fact – the star was out, opting instead to make his own passion project, a remake of Papillon.

While DeKnight says “the big stuff, the action was all working”, it meant a major retooling of the human side of the story. It was producer/Legendary Pictures exec Mary Parent who suggested focusing on the son of Stacker Pentecost, the brave (but late) commanding officer of the PPDC played by Idris Elba in the first movie. One minor problem: Pentecost Jr hadn’t even been mentioned before…

“What his father didn’t see in Jake, Stacker saw in Mako, so there was much more of emphasis on her and her journey through the PPDC. Jake and Mako always had a cool relationship but I think when Stacker had more vision and dreams for her future within the PPDC, Jake fell away. I think Jake interpreted that as Stacker not loving him enough.”

“I found that very intriguing and terrifying!” DeKnight recalls. “I had to figure out why he wasn’t in the first movie. But I loved the idea of that connection, so then the question became, ‘Who do you get to play the son of Idris Elba?’”

The answer was a man with a fair bit of experience with big-budget sci-fi franchises featuring state-of-the-art hardware. “I love movies about larger-than-life tech, and I love movies that are fun,” says Boyega, the Star Wars actor hanging up his blaster for a moment to take the lead in Uprising. “When I watched the first Pacific Rim I was looking forward to a sequel, and hearing the ideas Steve had, and seeing the pictures, got me excited.”

The best upcoming movies of 2018

As for why we’re only learning about Jake Pentecost’s existence now... “He’s purposefully stayed away from the PPDC, and we find him in the movie just stealing Jaeger tech and being a crook, to be honest. Jake’s a bit of an arsehole, and he’s a bit egotistical, because he’s always been by himself and everything goes on his terms. The film’s about him learning how to get a bit of humility in him and learning how he can be the best he can be to lead others.”

It didn’t help that Stacker had such a strong relationship with his adopted daughter Mako – Rinko Kikuchi reprises her role in the sequel (where Mako’s now running the PPDC), as do Charlie Day and Burn Gorman as scientists Newton and Hermann.

“What his father didn’t see in Jake, Stacker saw in Mako, so there was much more of emphasis on her and her journey through the PPDC. Jake and Mako always had a cool relationship but I think when Stacker had more vision and dreams for her future within the PPDC, Jake fell away. I think Jake interpreted that as Stacker not loving him enough.”

When we put it to Boyega that it must be a big step up from the Star Wars ensemble to leading man duties on Pacific Rim, he’s magnanimous enough to admit it’s a group effort. “I definitely do feel a sense of being at the forefront of this project, but I’m not alone. As much as Jake is the character [we follow], I’m backed up by some really great performances. And there’s big robots in it, so you can’t take all the credit!”

And that hits the nail on the head, because – like Transformers – Pacific Rim: Uprising will live or die on the strength of its mecha. “I was heavily involved as a producer in many aspects of the film, and I was conscious of all the Jaegers,” Boyega explains.

“Sometimes with robots you can’t tell which one is which, and in the craziness of the battle and visual effects, you always want the audience to have the information as to who’s fighting who. I think just making them look different as a starter was a great way to go. We said at the beginning of the process that each robot must have a special power or move that makes them specific.”

“What we didn’t want to do was just present the same thing again,” adds DeKnight. “That’s the reason most of our action scenes take place during the day rather than at night. Guillermo del Toro did such an amazing job with the action in the night in the rain and underwater, it felt like if we went down that path again it would just be a pale imitation. With the Jaegers the design is so important, we sweated over every decision, because we wanted each one to be cool and unique.”

“With the Kaiju it’s the same idea. The Precursors have also had 10 years to reconsider, rethink and redesign their biological weapons, their Kaiju, so we wanted each one again to be very distinct with distinct abilities. They actually turned out to be harder than the Jaegers, because you see a lot of really out-there designs, and my comment was always, ‘It’s cool, but when I see it I don’t know what it is.’

I didn’t want the audience to have to try to figure out what it is. You want them to be unique but not too unique. But the team had some very interesting updated Kaiju that tip their hat to the first movie, but also push it forward.”

This feature originally appeared in GamesRadar+'s sister magazine SFX, issue 298. Pick up a copy now or subscribe so you never miss an issue.