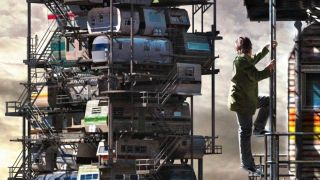 The first set photos from Steven Spielberg's highly anticipated adaptation of Ready Player One popped online last month, and it gave us a great look at the set designers' impressive work in pre-production. Filming is now underway in Birmingham, and some locals snapped more images and video revealing a car chase, Spielberg directing, and more.

Love the look of this! Fun walking through the Birmingham streets seeing it come to life #readyplayerone #spielberg pic.twitter.com/cnFgYu0QG5September 6, 2016

It's very exciting walking to work in the midst of a film set. #ReadyPlayerOne #Birmingham pic.twitter.com/2Hh5rux98hSeptember 6, 2016

I haven't read Ready Player One yet (for my sins), but I've heard enough raves from people to be excited about seeing what Spielberg is cooking up for 2018. As it is, this is a pretty cool peek at the production - the first image in particular is striking - and it looks like they've done a pretty great job of bringing the post-OASIS world from the book to life. We'll be watching this space.