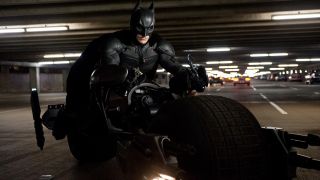 If you're after that added edge of authenticity for your next cosplay outfit, you can't go wrong with a bit of movie memorabilia. I mean, who wouldn't want real blood, sweat and tears soaked into the lining of say... the Batsuit? Well, someone with about $250,000 to spare agreed with that sentiment. Earlier this week a UK-based movie prop auction sold off The Dark Knight's outfit for a quarter of a million dollars.

The Prop Store parted ways with some of the coolest movie and TV swag available during its recent event. As well as the outfit worn by Christian Bale, the Batpod and Bane costume from Christopher Nolan's Dark Knight trilogy also found new homes, going for $400,000 and $125,000 respectively. Here's the auction's biggest sells:

That's a LOT of cash. What's most surprising is just how much smaller collectibles like Mulder and Scully's FBI badges went for. That's craziness. But is it as crazy as that mask worn in The Goonies?! $50,000 give or take a few thou. According to The Prop Store CEO Stephen Lane the 500 items up for auction sold for a record-breaking amount of money: “We managed to get some world-record prices there, which is very exciting for us,” he told Bloomberg. “The activity across the board was pretty unprecedented.”

Around 400 bidders across 27 countries participated in the auction. According to the store, most of those were international investment firms and archivists working on behalf of private collectors. Most of these one-of-a-kind items will be kept behind glass and away from public view, says Lane. Not unsurprising behavior from folks who've just spent $250,000 on a Batsuit.