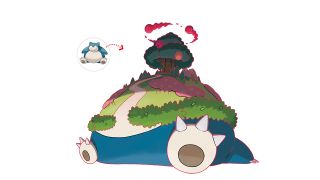 Pokemon Sword and Shield gave us big Pokemon with its Gigantamax forms - but things are about to get even bigger. Snorlax will appear in Max Raid Battles in the Wild Area starting next month, but you'll only be able to get the thicc boy for a limited time. According to The Pokemon Company's official announcement, "Gigantamax Snorlax will appear in Max Raid Battles from Wednesday, December 4, until early January (subject to change)."

If you need a refresher, Dynamax Pokemon are super big, but Gigantamax Pokemon are super big and different - as in they change forms and abilities. The Gigantamax version of Snorlax is in its infamous supine position, but now there's a lovely park growing on top of its big ol' belly. The Gigantamaxed Snorlax also has a special move called G-Max Replenish, which deals damage and restores berries for Snorlax and allies. This absolute unit is "one of the strongest Dyanamx Pokemon discovered" in the Galar Region.

In order to catch this extra chonky Snorlax, you'll need to connect your Nintendo Switch to the internet and head to the dens dotting the Wild Area starting December 4. Gigantamax Snorlax is a part of the Max Raid Battles rare encounters schedule, and he'll only be around until early January - although, as mentioned, this is subject to change.

Gigantamax Pokemon are already one of the best parts of Pokemon Sword and Shield, and when you give us a Gigantamax Snorlax, it's like the holidays have come early.