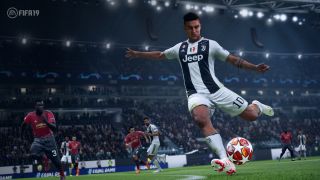 Piemonte Calcio isn't the name of some small, up and coming Italian team looking for their breakthrough. No, Piemonte Calcio FIFA 20 is the alternate name for Juventus in next year's iteration of the popular football game, the game that has used official licenses and club names for as long as I can remember. If you're wondering why Juventus isn't in FIFA 20, the Piemonte Calcio meaning, and what this means for the future of Piemonte Calcio in FIFA, you've come to the right place.

Piemonte Calcio FIFA 20: Will Juventus be in FIFA 20?

The short answer is that yes, Juventus will be in FIFA 20... just under a different name. The Italian giants have been renamed to Piemonte Calcio because EA has lost the rights to the club name, badge, kits, and stadium. Since they've retained the Serie A license however, the club will still exist in Career Mode, Ultimate Team, and every other mode, simply under the new name. This also means that Cristiano Ronaldo, Paulo Dybala, Aaron Ramsey, and everyone else in the team will still have their authentic names, faces, and everything else.

Why has this happened? The simple answer is that Konami has paid for the exclusivity rights to the club. This means that Juventus will be in PES 2020 - or eFootball PES 2020 as it's officially called, though nobody will actually refer to it as that. Ronaldo was last year's FIFA cover star too, so don't expect him back on the cover this year. Barcelona are also partnered with PES 2020 although not with the same exclusivity deal, so we probably won't see Messi on the cover again either. Just please don't give us Jordan Henderson again.

Piemonte Calcio might seem like a random, arbitrary name to give to the mighty Juventus, but it does actually have a meaning. As a club, Juventus are based geographically in the city of Turin, which is in the region of Piedmont, bordering France and Switzerland. Calcio, on the other hand, simply means "football" or "kick". It also means calcium, but I don't think that's what EA are going for with Piemonte Calcio.

That's all there is to it! If you want to play as Juventus in a football game, you'll be much better off buying eFootball PES 2020 this September. As for Football Manager, there's no word yet on whether Sega has also lost the rights to Juventus, but since it's much easier to download a logo pack on FM, it's not such a big deal. EA has also published a short information article on Piemonte Calcio and what it means for the future of the game, so check that out for everything else you need to know.