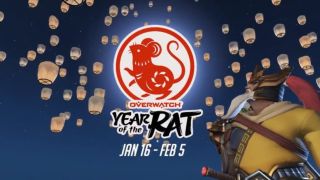 Update: Overwatch's Lunar New Year event will have at least two new skins, as confirmed by the game's official Twitter banner. Moira and Lucio will get event-themed skins, and it looks like they're not the only ones, as other skins have reportedly leaked.

Twitter user @OverwatchNaeri posted hi-res photos claiming to show Overwatch Lunar New Year 2020 skins for Brigitte, Lucio, Moira, Sombra, Doomfist, Wrecking Ball and Winston. The Lucio and Moira skins are the same ones featured on the official Overwatch page, so it's safe to say these are all but confirmed. Check out the confirmed two below.

Original story: Overwatch's annual Lunar New Year event has a kick-off date, and it's tomorrow, January 16. The announcement was made on the official Overwatch Twitter account, complete with a video featuring Hanzo in his Huang Zhong skin releasing paper lanterns into the sky.

Get ready to ring in the Year of the 🐀!Overwatch’s Lunar New Year festivities begin tomorrow! pic.twitter.com/bszNJheHDtJanuary 15, 2020

Oddly enough, we don't know anything else about tomorrow's event, which will celebrate the Year of the Rat and run from January 16 to February 5 (the Chinese New Year falls on January 25). The Lunar New Year event always starts shortly after the completion of the Winter Wonderland event, but Blizzard usually announces its start date a few days ahead of time. This year, however, we're finding out only a day early, which might be why we don't know anything else.

We've no idea how many new cosmetics and skins will drop with the event, or if there will be a new map or other limited-time game modes. In previous years, we've seen Lunar New Year-themed makeovers on maps like Lijiang Tower and Busan, as well as a wide variety of thematic skins, including ones based on Chinese military generals, a lion dance-inspired skin for Orisa, and a Hong Gildong skin for Tracer. There's usually eight new skins that drop during the Lunar New Year event, but as we previously reported, Overwatch updates have suffered as Blizzard sets its sights on Overwatch 2.

Could this mean we'd get a Lunar New Year event with no new skins? While it seems unlikely, the teaser posted by Overwatch features an old Hanzo skin - the only "new" thing it could be showing is perhaps a Hanzo highlight intro. We'll keep you updated with any Lunar New Year 2020 news as soon as we hear it.

Check out the Overwatch 2 version of our special series, Big in 2020: Overwatch 2 will redefine the video game sequel.