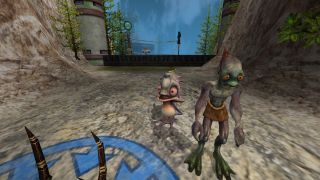 Oddworld: Munch's Oddysee HD is coming to Nintendo Switch, according to a new rating from the ESRB. An ESRB rating is by no means confirmation of an impending release, but ratings are generally better indicators than trademarks and the like, so there's still a decent chance that another Oddworld game is indeed coming to Switch.

Munch's Oddysee, the third game in the Oddworld series, was originally released on the Xbox in 2001. It was later ported to Game Boy Advance in 2003, PC in 2010, and PS3 in 2011. The PC port was initially bugged to hell and back, and it wasn't until 2016 that it became playable following the release of a reworked port. If Munch's Oddysee is coming to Switch, developer Oddworld Inhabitants will likely use the updated PC port as a base.

It would be a bit strange to see the third Oddworld game abruptly come to Switch, but it's not entirely unprecedented. Oddworld: New 'n Tasty, an HD remake of series progenitor Oddworld: Abe's Oddysee, was ported to Wii U in 2016. More recently, Oddworld: Stranger's Wrath was released on Switch just last week on January 23, 2020, so it would make some sense for Oddworld Inhabitants to follow it up with another installment in the Odd universe, especially one that's already been ported several times. Perhaps we'll see Oddworld: Abe's Exoddus, the game that connects Abe's Oddysee and Munch's Oddysee, come to Switch in the future.

Here are the most exciting upcoming Switch games of 2020 and beyond.