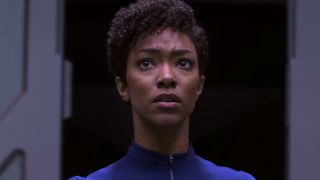 New York Comic Con 2017 had a special treat for Trek fans everywhere: a big ol' panel with special appearances from Star Trek Discovery's cast and crew. The panel (introduced by real-life astronaut Mae Jemison) showed ample love for the science behind the show while hinting at a few pending developments. Check out some of the most interesting tidbits from the panel right here.

We found out Uhura welcomed Burnham to Star Trek

Sonequa Martin-Green is the first woman of color to be the main character of a Star Trek series, but Lieutenant Nyota Uhura helped open the way for Michael Burnham decades before (or a decade later, in terms of in-universe dates). Near the beginning of the panel, Martin-Green revealed that she got a personal welcome to Star Trek from Nichelle Nichols, who portrayed Uhura in the original series and following films.

Nichelle graced us w/ her presence. She whispered to me, "Enjoy the moment, it's yours now." -@SonequaMG #NYCC #StarTrekDiscovery pic.twitter.com/tugRY9rt06October 7, 2017

Lorca teased some more complications in the future

We've already gotten a pretty good idea that Captain Gabriel Lorca will clash with much of his crew. And it doesn't sound like their relationship is going to get any less complicated soon, judging by actor Jason Isaacs' comments.

'Lorca is a war-time captain on a science ship.The stories will reflect that&present an "Ethical minefield" @jasonsfolly #StarTrekDiscoveryOctober 7, 2017

I mean, theoretically, yes. Somebody has to agree with Lorca, somewhere. But so far, Picard he definitely ain't.

A new character was teased

We haven't met Dr. Hugh Culber in Discovery yet, but that will change very soon. Actor Wilson Cruz confirmed at the panel that his character will make his first appearance on Sunday, in Episode 4: The Butcher's Knife Cares Not for the Lamb's Cry.

I'm so thrilled to share with you our first look at @startrekcbs Dr. Hugh Culber. I'm so proud to continue the #StarTrek legacy of diversity pic.twitter.com/LKKwUq8PZHSeptember 27, 2017

Spoiler warning! This section addresses significant events from Discovery's second episode. Scroll past the tribbles if you don't mind.

It sure looked like Captain Philippa Georgiou died at the end of a Klingon blade, but Michelle Yeoh says her role in the series isn't done yet. I really doubt that Georgiou's death scene was a fake-out so we can probably look forward to some flashbacks to Michael's time on the Shenzhou. Saying that Michael still has a lot to unpack from her former captain's death would likely be a gross understatement.

We will see more of Michelle Yeoh on Discovery! #StarTrek #NYCCOctober 7, 2017

Those are the highlights from the NYCC 2017 Star Trek: Discovery panel. Want some more stuff to consider before the next episode airs? Check out the 7 questions we have after watching Star Trek Discovery episode 3.