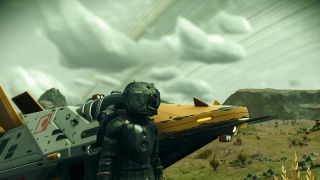 If you're not happy with the lot Hello Games has provided, you're going to want to peruse the best No Man's Sky mods to find some helpful additions to the game to make your life that little bit easier. Space can be a fickle beast, especially when nefarious aliens and robots are involved, so put your best foot forward and mod the game to your hearts content to make it the No Man's Sky you want to come back to. Read on for our guide to some of the current best mods available to players, from increasing your fuel capacity to adding terrifying giant beasts. Your call!

How to install No Man's Sky mods

Well, first things first, you need to know exactly how to install No Man's Sky mods.

Mod: Fast Actions for Next

It's kind of a first world problem, but pressing buttons can sometimes be a chore. Well, more specifically holding down buttons. Thankfully though, there's a mod for that and it actually lessens the time it takes to access your menus, to create or dismantle the various technologies, transfer resources, enter your ship, chat with alien entities and the other whatnot that makes up your daily No Man's Sky routine. There are even various versions of the mod to choose from, including adding a smaller cursor, a medium speed version and more. I personally liked the standard fast option with the smaller cursor.

Eliminate that 'Starship Out of Range' frustration

Mod: Starship out of range and faster scanner for Next

How frustrating is it that just as you want to transfer some resources to your ship, it's mysteriously out of range? Even though you can see the goddamn thing. Well, it turns out that there's a mod for that too. A particularly useful mod that increases the interaction range of your starship, taking it from "how can I still see you" to "I left it on the other side of the planet" kind of distances.

Running out of launch fuel at the exact moment you need to escape a level 5 sentinel attack is quite inconvenient to say the least. Even more so when you've got to try and gather enough ferrite dust to craft a Metal Plating and enough di-hydrogen for the fuel without being lasered to death. Bah. However, this mod actually reduces the amount of fuel you need to take off, either eliminating the need for fuel entirely - wouldn't that be handy in real life - or simply taking the required percentage down.

There are four levels to this mod, which are as follows:

Mod: Better HD clouds for Next

There's something about seeing a freshly discovered planet from space that gives it that additional majesty. But what if you applied a mod that made it look like it was eve more like a real planet? Well, this HD clouds mod adds more textures and detailing to the clouds that patrol a planet, making them look much more like the fluffy sky ornaments we know and love. It's more noticeable from space, but it does make the on-planet skyscape just that bit prettier.

Give Newt's Fantastic Beasts a run for their money

Remember when I said that the creatures had been totally upgraded with Next? Well, it turns out there's some more tweaking to do. And with this mod, you're going to see beasts the likes of which you can check out above. Like, seriously cool, giant teddy bear things that you almost wouldn't mind peering through your window at night. You can opt for the aggressive version if you so wish, but I have enough trouble with the sentinels that I dread to think how my gameplay experience would go if the fauna started attacking me as well.

Give me (pretty) water

If you want another tweak to make No Man's Sky even prettier, you have to check out this mod, which literally does what it says on the name. The HQ Water mod makes your water better looking, particularly from underneath, so when you're swimming around checking for resources and generally having a paddle, make sure to gaze up towards the surface to appreciate all those watery peaks.

A little bit of peace and quiet

"Radiation protection falling." "Thermal protection falling." "Extreme temperatures detected." Sometimes your exosuitOS' ability to state the obvious can drive you to the mute button. Her specific metallic tone can cut through even the most peaceful exploration mission and sometimes you just want her to go away. As the title of this mod suggests, it turns out I'm not alone in my occasional quest for some peace and goddamn quiet in the cosmos. By installing this little guy, you can actual disable any voiceover message in the game, on a case by case basis - or all of them if you're seriously dedicated to the zen. All the instructions are in the mod, but here they are just in case:

2) Run "build.bat" and select the voiceover files you would like to disable

- You can put a "+" (plus sign) before a number to hear an audio sample in English of what you are disabling (like this: +2)