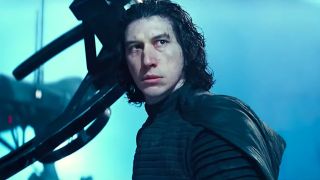 In the clip, Kylo's TIE Silencer arrives on an unknown planet in the middle of a lightning storm (how appropriately moody). Kylo approaches a structure, lightsaber out, as Ian McDarmid's voice calls out "At last. My boy." Okay, so we definitely heard Emperor Palpatine's laugh in the other trailers, and we've known he's going to be involved in this somehow. But what happens next is a pretty big indication to his role in this film.

"I have been every voice you have ever heard inside your head," Palpatine says, shifting between the voices of Supreme Leader Snoke and Darth Vader as he speaks. It looks like Palpatine was the puppet master behind Snoke, the main villain in both The Force Awakens and The Last Jedi. Now we know he's been pulling Kylo's strings as well, dragging him deeper into the dark side.

The clip then shifts to John Williams' amazing The Duel of the Fates theme before showing us some quick clips that are a mix of new and old: Rey and crew running from Stormtroopers on the sand planet, the team racing towards a structure on what looks to be the same planet Palpatine is on, Rey and Kylo facing off on that planet, Rey standing in front of a burning TIE Silencer, and more. It's a great clip, promising us a lot of action in the final story in this decades-long saga.

Is it an odd choice to give away that Emperor Palpatine isn't just alive, but actively affecting the universe in this clip? Kind of, as there are some people who may want to go into this film completely devoid of any knowledge of the plot. I however, am a Spoiler Queen, and am totally okay with this.

Star Wars: The Rise of Skywalker drops worldwide on December 20, with select viewings on December 19. Until then, read up on how the movie will introduce new Force powers that will "infuriate some people" according to J.J. Abrams.