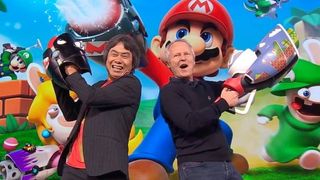 E3 2019 is nearly upon us, and it's sure to bring a host of exciting E3 2019 games as the E3 2019 schedule unfolds and hopefully makes our wildest gaming dreams come true. But years from now, when all these hype-inducing games have launched and console generations have moved forward, what will we really remember from the show's many presentations and reveals? The most memorable E3 moments typically don't revolve around a single game, per se - they live on thanks to our nostalgia for announcements that rocked our world in an age before constant leaks; the purity of a heartwarming, candid moment; or the infamy of awkward snafus followed by uncomfortable pausing for applause. What follows is a list of the greatest, most memorable E3 moments of all time - the announcements that made us stand up and shout with glee, or hide behind our hands with embarrassment. How many of these E3 moments do you remember?

The legendary Final Fantasy series found its footing on Nintendo consoles, then made Sony millions by devoting itself to the PlayStation platforms. Final Fantasy 13 was the first entry to venture into Microsoft territory as a multiplatform release, and marked the beginning of an age where console-exclusive AAA titles would be fewer and farther between.

Valve co-founder and PC gaming icon Gabe Newell made an appearance during Sony's E3 2010 press conference to talk Portal 2, proving that he would not spontaneously burst into flames when discussing a console. Newell's unassuming likability instantly won over the crowd, and it certainly didn't hurt that he was announcing a sequel to one of the most beloved games ever made.

We now know that Metroid: Other M would be the series' biggest disappointment (save Metroid Prime: Federation Force), but we were all blissfully unaware of the mediocrity that awaited us when the game was first unveiled at Nintendo's E3 2009 conference. The  third-person perspective and focus on cinematics marked an intriguing departure from the FPS exploration of Metroid Prime, but it seemed like Team Ninja could do this new direction justice after winning over legions of hardcore gamers with the first two Ninja Gaiden games. Sadly, the end result wasn't all it was cracked up to be.

During a notably small-scale press conference, Square Enix announced what would eventually be known as Nier: Automata, a sequel to a cult hit action RPG (which itself was a spinoff of the obscure RPG series Drakengard). It's already a bit odd for project director Yoko Taro to stand at the podium wearing a giant mascot head that makes his voice inaudible - but it's even more of a trip when that mask is a reference to a side-character in an incredibly niche game, ensuring that only a tiny fraction of the audience will have any idea what the reference is. The best part: nobody on stage even acknowledged how incredibly weird this all was, which made the whole thing even stranger.

As a concept, Wii Music - a game about abstractly waving around a Wiimote to conduct or create melodies - was doomed to flop with core gamers who had already played plenty of rhythm games. But Nintendo's E3 2008 press conference didn't do Wii Music any favors, from the outright bizarre intro from Ravi Drums as he violently convulsed behind a virtual drum kit, to an unbearably amateurish performance of the Super Mario theme.

Everyone was still reeling from the grand reveal of Beyond Good and Evil 2 at E3 2017 after years of rumors and speculation regarding a sequel, so Ubisoft could've shown us just about anything from the game at E3 2018 and fans would be happy. But we also got a heartwarming, unrehearsed moment of genuine joy when Ubisoft Montpellier developers Gabrielle Shrager and Guillaume Brunier shared a moment of post-presentation celebration, unaware that they were speaking into hot mics. "We nailed it!" said Shrager excitedly after walking offstage, and everyone in the audience couldn't help but beam at the sheer purity of it all.

Super Smash Bros. character reveals always bring the hype, but adding Capcom's robot hero to the roster was a masterstroke of fan service. After seeing how the Mega Man brand had been so grossly mishandled in years prior, this classic iteration of the Blue Bomber just felt so right. Being able to pit Mega Man against other iconic heroes like Mario, Sonic, and Pac-Man turned Super Smash Bros. for Wii U/3DS into the apex of old-school appreciation.

It's always darkest before the dawn. In a time when Ubisoft hadn't yet locked down the lovable Aisha Tyler as the annual host for its E3 press conferences, it experienced the worst strikeout in E3 history: Aaron "Mr. Caffeine" Priceman. This host's annoyingly high energy, awful attempts at humor, and smarmy stage presence solidified him as the worst presenter E3 audiences had ever seen, and his performance will live on in infamy.

Some people wait a lifetime for a moment like this. Ubisoft pulled out all the stops for its E3 2017 press conference, and the highlight of its show was a surprise cameo by Shigeru Miyamoto, who joined Ubisoft CEO Yves Guillemot onstage to show off Mario + Rabbids Kingdom Battle (a game we still can't believe exists). While seeing Miyamoto and Guillemot posing back-to-back was a hoot, the best part was a crowd reaction shot of creative director Davide Soliani, who was tearing up and overwhelmed with emotion watching Mario's creator talk about his game. It's the stuff that game developer dreams are made of, and you don't often get to see the more affecting aspects of development like Soliani's career-high triumph firsthand.

Sony made dreams come true with its E3 2015 press conference, confirming three highly anticipated games that were long thought dead: an HD remaster of Final Fantasy 7, The Last Guardian, and Shenmue 3. For a certain Venn Diagram subsection of gamer, experiencing this trio of PlayStation announcements was akin to seeing God.

Games industry breakups don't get much messier than the split between Hideo Kojima and Konami. After nearly 30 years working at Konami, the creator of the legendary Metal Gear series found himself getting edged out of the company, with the Kojima Productions name stricken from promotional materials in the lead-up to Metal Gear Solid 5 and the highly anticipated Silent Hills getting canned. "I thought I had lost everything," Kojima recalled during a 2019 panel. But shortly after the drawn-out breakup, Kojima was treated like royalty during Sony's E3 2016 press conference, descending onto the stage via a sick Tron-style staircase to announce Death Stranding, which instantly lit up the internet and had everyone dying to know more about 'Norman Reedus and the Funky Fetus.' After a year of Kojima suffering silently behind the scenes, it was great to see the famed auteur back on top with one of the most entrancingly bizarre trailers ever made.

You'd have to be some kind of monster not to love Shigeru Miyamoto, one of gaming's godfathers and the driving creative force behind numerous Nintendo classics. It's his modesty and unerring positivity that help make him so adored, and that uplifting energy was perfectly encapsulated during Nintendo's 2004 press conference, which closed out with one hell of a "one more thing" announcement in the form of the The Legend of Zelda: Twilight Princess reveal trailer. As the trailer concluded and the room exploded with excitement, Miyamoto appeared on stage brandishing the Master Sword, Hylian Shield, and his usual, impossibly charming smile. It was the perfect capper to a momentous reveal, and a reminder of the kind of pure joy that Nintendo is so expertly capable of evoking.

When something looks too good to be true, it probably is. Such was the case with the trailer for Killzone 2 shown off at Sony's E3 2005 press conference, which featured graphics and smooth FPS action that looked impossibly advanced for the planned PS2 hardware. Turns out, that trailer was a far cry from the sequel's actual state, and the pressure to match what was shown is what spurred the game to eventually be rebuilt and released for PS3. But hey, the general public didn't know all that back then - everyone was simply stunned by how enchantingly good everything looked.

You've probably heard how Sega surprise-launched the Saturn during the first-ever E3 in 1995, but Sony stole all that thunder almost immediately. You see, Sega's stealth console release came with a hefty price tag of $399, and major retailers weren't really prepared (understandably) for a console launch out of the blue. During that same E3, SCEA's then-president Steve Race took the stage to discuss the price of the upcoming PlayStation console in North America. He sauntered up to the podium, uttered "299", and walked off to thunderous applause. As you no doubt know, 100 bucks can make a big difference in a console war, and gave the PS1 significant momentum that it would ride through an entire console generation.

Granted, it's no Konami 2010, but Sony's E3 2006 press conference is infamous for its many missteps, from Sony CEO Kaz Hirai's half-hearted cry of "Riiiiiidge Racer!" to the unveiling of the PS3's steep $599 price tag at launch. But the best bit from the whole thing was a demo of Genji: Days of the Blade, a game that revolves around "famous battles which actually took place in ancient Japan" yet somehow found room for two-story crabs with colossal claws and demon faces amidst all the chaos. Never fear - as long as you "attack its weakpoint for massive damage," you'll be fine.

3. Xbox One online requirements send people into a frenzy (2013)

The public did not take kindly to the first iteration of the Xbox One announced at E3 2013, which was originally going to require a constant internet connection lest you lose access to all your games. Players loathed the idea, and the reaction was so overwhelmingly negative that Microsoft eventually rescinded the always-online requirements. Unfortunately, the 180 didn't occur until after then-Xbox chief Don Mattrick uttered a Marie Antoinette-esque line defending the decision: "Fortunately, we have a product for people who aren't able to get some form of connectivity. It's called Xbox 360."

You typically expect a few goofy, off-kilter moments during every E3 press conference, but Konami's presentation at E3 2010 was practically a parade of cringeworthy silences, flubbed lines, and horrendous stage demos of unexciting games. From Tak Fujii's unforgettable, barely intelligible reveal of Ninety-Nine Nights 2 to the horrifying death stare from Silent Hill: Downpour producer Devin Shatsky, this presser was a hilariously botched, painfully uncomfortable debacle that can never be topped.

Former Nintendo of America president Reggie Fils-Aime was one of the most personable execs in the industry before his happy retirement, and Nintendo's E3 2004 press conference marked his first on-stage appearance and the inception of what would become his catchphrase. While stepping up to the Wii Balance Board during a live demo of Wii Fit, Fils-Aime mustered up the courage to have his physique evaluated in front of the gaming populace. "My body is ready", he proclaimed - and thus, history was made, and Nintendo fans discovered their go-to statement when expressing their excitement for just about anything.

Do you remember experiencing some (or all) of these memorable E3 moments? Think we missed some of your favorites? Let us know in the comments below!