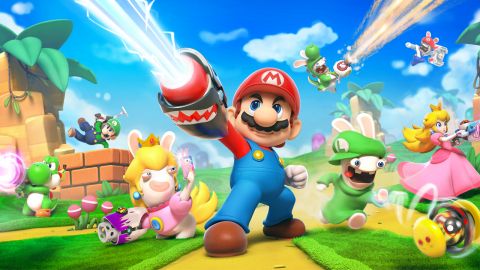 Mario + Rabbids gives you the action and strategy of XCOM in a way that does justice both to Mario and to the Rabbid’s kooky style. Ubi’s big E3 surprise is an unmissable Switch game.

This is how we roll in my corner of the Mushroom Kingdom. First Mario gets into position, popping out from behind hard cover to take a potshot at the rabbids who’ve been messing up the manor. Once he’s done a little damage, I activate his Hero Sight. Some bad bunny pops his head above the ramparts to fire on my team, he’s going to wish he hadn’t.

Next, it’s Rabbid Luigi’s turn. He slides around the corner and dashes through the legs of a sniping long-ear, knocking him for six. And when Rabbid Luigi does this, that’s not all that happens. He drains the damage done to restore his own health, vampire style, then spins and socks the bushwhacked bunny with his rocket launcher. Finally, it’s time for Princess Peach. She kicks ass with a double-dash move, then mops up the remnants with a blast to the face from her shooter. One round down and we’re two Rabbids gone, one injured; not bad going for this stage of the scrap.

This is a hybrid that shouldn’t work, where Mario and a team of Mushroom Kingdom stalwarts meet Ubisoft’s loony lapins for some XCOM style skirmishing. It does, though, because it mixes brilliant, polished game mechanics with a real understanding of Mario and what people want from a Mario game. The biggest complement I can pay Mario + Rabbids is that it doesn’t feel like a third-party title, but something one of Nintendo’s own studios has made.

Even the look, feel and sounds have that Nintendo touch. The bright, breezy visuals, the use of light and colour, the way both the native Mushroom Kingdom cast and the rabbid interlopers are drawn and animated. Listen to the score and the effects, taking classic Mario themes and samples and giving them a crazy twist. Check out the way everything’s presented, with minimal menus and most activities accessible from a Castle hub. Whether you play it at 900p on your TV or 720p on the undocked console, Mario + Rabbids is a great showcase for Switch.

Let’s talk particulars. After some preamble where the game sets up its gleefully nonsensical plot, it splits into two experiences. In the first, you’re following a trail of destruction through the Mushroom Kingdom, as a rogue rabbid and his accomplices go crazy with a device that combines elements of different worlds. Here you try different pathways, solve simple block and switch puzzles, search for hidden treasure chests and generally explore.

Pass a gate with two flags, however, and it’s battle time. The action’s turn-based, with first your three-strong squad active then the enemy, and in each turn you can do three things. Firstly, you can move, looking to get into cover or use a dash move to bowl over rabbids and score a cheap hit. You can also slide through pipes or use a comrade as a springboard, which is handy for reaching higher ground or quick flanking manoeuvres. Secondly, you can shoot, pulling out your primary or secondary weapon and blasting away at your buck-toothed foes. There’s range and cover to consider, though the game gives you clear indications on both, not to mention the potential damage you might do. Paying attention before you strike is a good idea.

Finally, you get a chance to use a technique. Each playable character has two to choose from, ranging from Mario and Luigi’s watch-and-snipe moves – yes, Luigi actually has a death stare – to Rabbid Mario’s enemy-attracting Magnet Dance and Rabbid Peach’s Heal move. The clever thing is that the game’s so flexible about switching between characters and even switching between phases. You can trigger an activity, then shoot, then move if you like, or even get Rabbid Peach to dash through an enemy and blast them, then move the rest of your team into proximity for a big group heal.

That’s what’s so surprising about Mario + Rabbids; it’s no XCOM-lite but a family-friendly take on XCOM with some distinctly Mario mechanics. You’ll understand this as you level up your heroes and gain new ones, using the Skill Tree to develop new techniques that can help you take on incredible odds and win. You learn to chain runs, jumps, dashes and attacks, or use colossal hammers to smash the rabbids where it hurts. Stomp jumps and special dashes turn the move phase into a crucial chance to wear down tougher enemies. You can even combine the powers of different characters, putting Mario or Luigi in their Hero Sight or Steely Stare modes, then using Rabbid Luigi’s sentry to draw a hostile into their line of fire.

What’s more, the environments create their own opportunities and dangers. Cover can be strong or brittle, leaving you defenceless and out in the cover if you don’t watch out. Many of the stages are criss-crossed with pipelines, getting you near-instantly from low-ground to high-ground, where you get better visibility and a damage bonus, or across the map.

You will make bad decisions and - inevitably - critical mistakes, but when you do the restart’s quick and you rarely feel the camera or the game’s to blame. It’s rarely bad luck or unfair odds that holds you back, but a failure to spot the strategy that’s staring you in the face or exploit some environmental advantage. And if you’re really struggling, there’s always the option of an instant switch to Easy mode, boosting your health, which doesn’t recharge within chapters, to give you a better chance of winning through.

The biggest risk here is repetition, sustaining the action over four worlds, each with nine chapters, each with two battles or a boss fight, isn’t all that easy. Mario + Rabbids handles the challenge in the ways you might expect, making the stages bigger, changing the scenery and adding new enemy types, each cleverly themed around the world in question. Sherbert Desert, where hot sands and frozen wastes combine, brings in massive rabbids toting giant ice blocks, rabbids with riot shields and grenade-throwing rabbid medics. Spooky Trails adds stealthy, fast-moving phantom rabbids, always difficult to pin down.

Meanwhile, some missions mix up the conditions. You might have to escort Toad or Toadette across a busy battlefield, move one hero at speed to the endzone or fight off a set number of enemies as they constantly respawn. Sometimes the stage itself throws in something extra, like a tornado that sweeps through the stage, tossing combatants around, or sneaky Boos that kidnap your heroes and spirit them elsewhere.

Most winningly of all, Mario + Rabbids throws in proper mini-boss and boss stages, and these work exactly as you’d hope, with each boss having its own attack waves and vulnerabilities, pushing you to avoid the former and target the latter in time to wear them down. Cleverly, these climactic scuffles draw on strategies and lessons you’ll have learnt in the chapters before, encouraging you to think more tactically and harness your experience. See what we mean about how it feels like a Nintendo game?

If so, it can be a surprisingly challenging one. Upgrading your weapons and spending skill points - or orbs - in the skill trees is crucial, as is mixing and matching your teams and resting characters when they’re injured in the middle of a chapter (luckily, as this isn’t XCOM, they can’t die). To help, you can return to previously-explored worlds and tackle new challenge missions, fighting against turn limits or difficult conditions for coins and orbs. Later on you can use the Rabbids’ time machine to redo earlier missions, going for a better ranking and more rewards. Throw in hidden areas, unlocked by new abilities, and even hidden bonus chapters, and this isn’t a ‘lite’ game at all.

The only mild disappointment? Multiplayer. You can tackle a series of specific co-op missions, switching between two two-man teams with a mate, but that’s it. Kudos to Ubi for making it happen and sorting out decent single joycon controls for those without an extra set, but what we have here is a fun time-waster, not the kind of multiplayer game that has serious legs.

This we can live with. This is a seriously brilliant single-player game and a perfect hybrid title for Nintendo’s hybrid platform, great in bite-sized chunks for playing on the go, but with the depth and interest that can keep you glued to the screen for hours on end.

Mario + Rabbids gives you the action and strategy of XCOM in a way that does justice both to Mario and to the Rabbid’s kooky style. Ubi’s big E3 surprise is an unmissable Switch game.