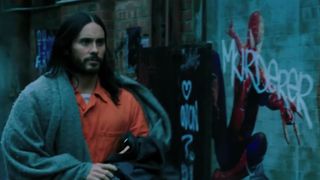 How Morbius links to the Marvel Cinematic Universe has yet to be explained, but new evidence shows that the upcoming movie could also tie into Sam Raimi's Spider-Man trilogy. And yes, it's not just Spidey's webs that are spinning, but our heads too.

A new set photo allegedly from the set of Morbius shows a "Where is Spider-Man?" poster stuck onto the back of a public transport bus. Now, we already know that Spider-Man will appear in poster form in Morbius, but what's intriguing here isn't the inclusion of Spider-Man – but The Daily Bugle.

The famous fictional news broadcaster recently appeared in Spider-Man: Far From Home, with J.K. Simmons returning as J. Jonah Jameson. This time, though, Jameson's not the fast-talking newspaper owner of Raimi's films, but a bolshy right-wing commentator for the news website The Daily Bugle.

sony just creating a fake hype with sam raimi spiderman or they actually setting up a spiderverse its so confusing lol pic.twitter.com/qMEyaTi0CQFebruary 9, 2020

What does this all mean? Frankly, we have no real idea. To further confuse things, the Spider-Man poster that appeared in the Morbius trailer featured the web-slinger wearing a costume suspiciously like the one in Rami's trilogy. Yet, Michael Keaton's Vulture from Spider-Man: Homecoming also appears in Morbius, meaning it will likely link to the MCU.

We're trapped in a web of questions that hopefully, come Morbius' release later this year, will finally be answered. In the meantime, check out our ranking of the 25 best superhero movies you can watch right now.