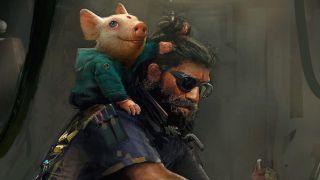 Beyond Good & Evil 2 is almost mythical by this stage. The sequel to the 2003 original has been dangled by creator Michel Ancel for more than a decade. And you thought The Last Guardian was bad. Ancel is back again with an even more tantalising tease. He posted the below image on his own personal Instagram with the caption "Somewhere in system 4 - Thanks #Ubisoft for making this possible."

Somewhere in system 4 ... - Thanks #ubisoft for making this possible !

Ancel has constantly said that the game is still in development but he's been looking busy working on Wild, his own indie project where you can play as various animals in an open world. Although might that be on hold again if he's picking up the reins again on Beyond Good & Evil 2. Let's not get too excited though. We've been here before.