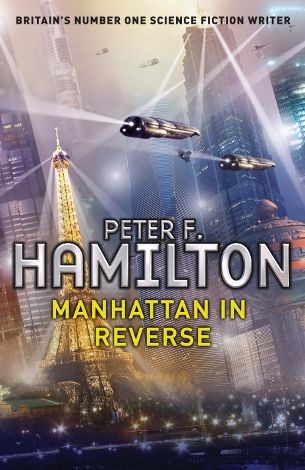 Seven short tales from the king of space opera

Slim and elegant are not words you readily associate with Peter F Hamilton. That’s not to suggest that one of Rutland’s finest citizens needs to take up jogging, it’s rather a way of noting that he’s a name more easily associated with hefty space operas than short fiction. As Hamilton himself says in his introduction here, his novels take up so much time that, “I get to write about one story a year, if I’m lucky.”

Nevertheless, it’s still something of a shock to realise that Manhattan In Reverse , which numbers just seven tales, is his first collection since A Second Chance At Eden , which was published back in 1998 and featured tales set in the Night’s Dawn universe. So has it been worth the wait? Happily, yes. Hamilton may write short stories only slightly more frequently than your auntie Doreen goes to the Moon, but that doesn’t mean he’s not adept at the form.

Proceedings kick off with “Watching Trees Grow”, an alternate history tale that imagines a past and future where the Roman Empire never fades from influence. No, this isn’t an unexplored idea, but that doesn’t matter because Hamilton’s take on it is new – unless of course there’s another Rome-themed, multi-generational, hunt-the-murderer police procedural out there that SFX has yet to read. There’s even a running gag centred on the impossibility of ousting the Borgias.

Yet it’s also a story that picks over familiar Hamilton territory. Specifically, he’s a writer who’s long been fascinated by the idea of longevity, whether achieved initially through breeding (as in “Watching Trees Grow”), an idea Robert Heinlein famously explored with his tales featuring Lazarus Long, or through clever science. In that context, “If At First…” is a spooky take on jumping between worlds as a way to ensure life eternal, while “The Forever Kitten” suggests the rich may (as Iain M Banks is fond of pointing out) be the last people we should trust to stick around for longer than the allotted three score and ten.

But that’s not to suggest Hamilton is in any way a one-trick pony. Arguably the best story here is “Footvote” (revised from its first publication in the magazine Postscripts ), which imagines the creation of a new England on the planet of New Suffolk. The snag? A wormhole to reach the world will be open for only two years, so what happens to those who choose not to go as society around them starts to crumble because of a mass exodus? It’s a disquieting story that grapples with ideas around freedom and responsibility. Read it three times and you still won’t be entirely sure of Hamilton’s politics, which is presumably exactly what he intended.

The final trio of stories each belongs in the timeline of Hamilton’s Commonwealth series, with “Blessed By An Angel” focusing on the tension between post-human Highers and those who prefer to keep more facets of the flesh-and-blood life.

As for “The Demon Trap” and “Manhattan In Reverse” (the one story here that’s not been published before), each features Paula Myo, Hamilton’s implacable detective, a woman bio-engineered to be a cop and utterly incapable of giving up the hunt for a criminal. Arguably, neither has too much new to say about Myo’s character, which after all runs on rails, but they’re still entertaining: “The Demon Trap” because its denouement is fiendishly clever, “Manhattan” because it suggests a warmth in Hamilton’s writing that’s not always been evident in the past.

On the debit side, the short story may be a form that demands neatness, but it’s nevertheless possible to tie up story strands just a little too neatly. There are a few moments here when you can’t help thinking that Hamilton rather closes down events – it’s sometimes fun to imagine what happens after the author has stopped watching his characters.