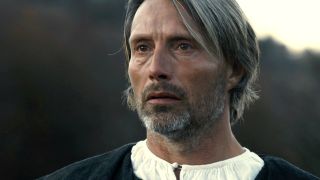 As excellent as the first Rogue One trailer is, it's still missing something - Mads Mikkelsen. The man who made Hannibal terrifying again tackles a good guy role in Gareth Edwards' spin-off yarn, and, as is typically the case with all things Star Wars-related, we know next to nothing about his character. He's not in that teaser (unless he was that hooded figure?) or any of the artwork.

That's no longer the case, as Mikkelsen confirmed a key detail concerning his character during an interview with Sky News. You can check out the video for yourself below, or skip ahead to the juiciest bit:

If you didn't watch the clip, here's his answer when asked about how he felt joining Edwards' movie: “A little scared. I wasn’t really sure if I was wearing a Stormtrooper outfit or anything like that at that point. I wasn’t sure I could fit into that. I read the script. It was very beautiful. And Felicity [Jones] is playing this lovely, strong woman, and I play her father. And that was too much. I’m sorry.”

There you have it folks: Hannibal is Jyn Erso's father. That "lovely, strong woman" joins the Rebels as part of a ploy to steal plans for the Death Star. So how might her dad factor in? It's all speculative at this point, but Mikkelsen did say last year that he plays "a very important role."

Staying on the topic of dads, the interviewer goes on to ask Mikkelsen whether or not he could confirm a long-standing rumor: is Darth Vader in the movie? “Yes, I can," he replies, "But I won’t.” That cheeky devil.