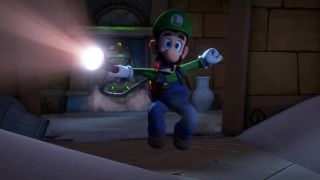 For the completionists out there the Luigi's Mansion 3 Golden Ghosts provide a little more to strive towards towards. Each one is also able to reward you with cash to spend on anything. It should be easy money. However, even without any special abilities these Golden Ghosts can put up a fight by flying across the screen quickly, making it harder to capture them. So you'll want to be prepared and have your flashlight to hand so you can stun any you find before slamming it multiple times to finish the job. With that in mind here are some of the Luigi's Mansion 3 Golden Ghosts and how to capture them.

You can find golden ghosts hidden under carpets, in chests, in cracks in the wall and so many other places.

When you find one the lights in the room will dim and it'll start laughing like the rich idiot it is. It'll speed from one side of the room to the other, occasionally attacking you. They don't have a ton of health, so it should be easy to take out. As you capture them via vacuum or slam money will spew out. Make sure to collect it before it despawns.

Here are a few areas I've found golden ghosts in, although I'm not sure if they are randomly spawned. Your results may vary.

Tucked in the far right corner of the room with E. Gadd's lab is a hidden car. Use your Dark Light to reveal it and then interact with it. A golden ghost will pop out, use your light and Poltergust to capture it.

On the same floor, there is a trash can directly in front of the entrance near the back wall (it looks like a garage door). Interact with it and a golden ghost should pop out.

You'll find this guy hiding in the fridge in the little coffee shop located between the two stores on the second level. Go up the escalator, turn into Gooigi and slide through the security bars. Header over to the fridge, open it up, try and clean it and should pop out.

4th Floor Room at Side of Stage

Pull the Tuxedos in the corner of the pianist room and a golden ghost will pop out.

This one is pretty hard to miss when you're playing through for the first time. In one of the rooms leading up to the arena where you fight a knight ghost, there will be a barrel next to a chest. Slam it and a golden ghost will pop out.

The rooms are the garden floor are filled with stuff, like couches, dressers, and bed frames you can break apart. Check for a golden ghost in the room with the hammock and one should pop out of an item nearby.

Once you complete the poison puzzle on the desert-themed 10th floor you'll find an oddly shaped block in one of the vases laying on the ground. Break all of them open with the plunger just in case. Walk back out to the entryway and shoot it up into the oddly shaped hole. The wall will open up where both a gem and a sarcophagus with a golden ghost inside can be found.

In the front corner to your right when you first enter the big room there will be a lamp. Grab that lamp with the vacuum and a ton of goodies will come out of it, including a golden ghost. Make sure to clean up a bunch of sand first.

Use your Poltergust to push and pull the saw as it tears through the box. A golden ghost will pop out.

A golden ghost will be hidden in the crates on the end of the ship, up the ladder. You can reach it after you beat the boss on the Spectral Catch floor.

Use your light to flash both the water fountain and the stereo at the same time and two golden ghosts, plus a gem ghost, will pop out.

Head all the way to the power switch in the library puzzle of the final floor and turn left once you are next to it. You'll see a big book on a pedestal, turn its pages with your vacuum and a golden ghost will pop out.