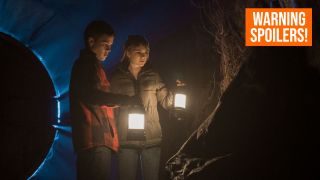 When adapting something to the small screen, there are always going to be a couple of differences to the source material. Netflix's Lock and Key is no different.

The comic book, written by Joe Hill and illustrated by Gabriel Rodriguez, features more visceral, bloody, and violent content than season one of the Netflix show – no doubt in order to cater for a more family-friendly audience. Much of the comic's time-tangling narrative has also been unwound and rearranged to get the plot moving quicker while also expanding on the characters' backstories and motivations.

But that doesn’t mean the heart of the story has been lost. In fact, in some ways, the changes have given the TV show space to breathe and create a wider world that could easily allow several new narrative threads to intertwine across future seasons without losing the power of the core story.

So, what else has changed from paper to screen? Here are some of the key differences between the two – including major spoilers for the comics and the show.

On the page, Nina is presented as a sexy, raven-haired mother who is raped by Al Grubb – the accomplice of Sam Lesser – when they murder her husband, Rendell Locke. Not much is made of this traumatic sexual assault, but it causes her alcoholism to spiral out of control following the family's move to Keyhouse and after Sam’s second attack. This forces Tyler to step up into a more paternal role and causes tension between her and Kinsey until later volumes when she starts getting a handle on her drinking problem. However, she doesn’t play as big a part in the story as she does in the TV show so far.

Netflix's version of Nina is played by Darby Stanchfield as a redheaded suburban mum who has been sober for six years. Al Grubb is retconned from the story, as well as the sexual assault, and it is Nina who manages to incapacitate Sam Lesser (Thomas Mitchell Barnet) after he murders Rendell (Bill Heck). Once the family arrives in Matheson (formerly Lovecraft), she takes a more active role in learning about her husband’s life there, becomes friends with Ellie Whedon (Sherri Saum), and has more interaction with the magical keys. She does fall off the wagon after Sam’s second attack, but she cleans up her act pretty quick with the help of Detective Matuku (Martin Roach). So, the TV version of Nina plays a more active role in the show which makes up for quite a reductive impression on the page.

In the comics, Rufus is the biological son of Ellie and her ex, Gil, who leaves the family to join the military. Rufus has an unspecified mental disorder and, though he speaks in military language through his action figures, he is more than aware of the dangers around him. He suffers from physical and emotional abuse from his grandmother Candice Whedon until she is murdered by Dodge.

In the show, the grandmother is not around but Rufus (Cody Bird) is the adopted son of Ellie and works as the groundskeeper for Keyhouse. He still plays with action figures, but he communicates more easily with others than on the show.

Ellie is similarly manipulated by the echo of her dead boyfriend Lucas/Dodge throughout the season, though in the comics a fragment of his mind inserts itself into Ellie’s, causing her to go slightly mad. Her death is also changed from the page: originally she is murdered by Dodge but in the season finale, she is mistakenly thrown through the demon portal by the Locke kids and their friends because her identity was changed to look like Dodge.

Dodge (Laysla De Oliveira) is the female form of the demonic echo of Lucas Caravaggio and, like in the comics, she’s the first version we meet in the well house. However, in the TV show, once she escapes the well house, she interacts with the Locke kids (even snogging Tyler) and others in that form far more often compared to the comics – which instead sees her quickly use the Gender Key to return to looking like Lucas Caravaggio, adopts the name Zack Wells, and then pretend to be the nephew of Ellie Whedon. Instead of kissing Tyler, Zack becomes best friends with Tyler and the boyfriend of Kinsey.

In the show, Zack Wells doesn’t exist. In later episodes, we see flashbacks that show the demonic echo returned in the form of Lucas (Felix Mallard) after being summoned by Ellie, and she gives him the identity key to allow him to become Dodge. However, in the season finale, we learn that the romance between Zack and Kinsey hasn’t been retconned. Rather, the writers have created a different identity for Dodge in the new student Gabe. He becomes friends with Scot, the members of the film club, and Kinsey in order to get closer to the Locke family – all to find the keys.

English teacher Joe is far younger in the TV show and. because the Zack Wells version of Dodge doesn’t appear at the school. he is unaware of the demonic echo until later when he randomly sees his old student Lucas with the adult Ellie Whedon. His murder is less bloody too, though still pretty violent.

How the Head Key presents a person’s mind is different from the comics, in that it creates a door for people to walk through rather than them actually peering into a head. In Kinsey’s case, her mind becomes a shopping mall, while Erin Voss’s is a derelict version of Matheson Academy. The fact that she even has a mind to explore is another difference, as the comic book version has her entire memory wiped leaving her unable to say anything but “white” which, as a black character on the page, adds a racial element to the storyline that hasn’t been transferred to the screen, because of the casting of Joy Tanner and Nicole James.

Kinsey’s Fear Monster is also changed to become a life-size threat that attacks those in the real world, rather than the mini monster that she locks in a jar with the personification of her desire to cry. The series does change a few other keys, as well as adds a few.

The dynamics and make-up of Tyler and Kinsey’s friends have also changed. Tyler’s love interest is no longer Jordan, but Jackie, who in the comics was one of Kinsey’s friends. She is a kind, smart, and self conscientious girl who helps the Lockes in their time of need. The series also introduces a new character, Jackie’s best friend Eden, who has more in common with Jordan’s selfish, spoilt rich girl act, but with the addition of being a bit of a bully.

Scot’s best mate Jamal doesn’t appear, though the love triangle between the two and Kinsey has been used with Gabe as a replacement. Scot, who is mixed-race and British in the series is also now a cinephile and his pals’ short film endeavour provides a side narrative for Kinsey to develop their friendship and romance.

There are a lot more changes from the comic books that could be mentioned but with season two already in the work, the writers may well be saving key plot points and character developments for future episodes.

Want more on Locke and Key? We went on set to go behind the scenes Netflix's attempt to bring the acclaimed comic book to life on screen.