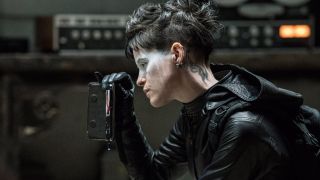 Following in the footsteps of Noomi Rapace and Rooney Mara, The Crown’s Claire Foy is the latest person to play the punky badass hacker Lisbeth Salander on film. Rapace starred in the Swedish-language Millennium trilogy, before Mara landed an Oscar nomination for David Fincher’s English-language remake of The Girl with the Dragon Tattoo.

Now Foy has inherited the role, in a film that’s more reboot than sequel, based on an adaptation of the book of the same name (the first to be written by David Lagercrantz, who continued the book series after the death of creator Stieg Larsson). Directed by Fede Alvarez (Evil Dead, Don’t Breathe), the film looks set to amp up Lisbeth’s avenging angel qualities as she goes about exacting spectacular revenge on very bad men.

You can see Foy in action as Salander below, hidden enigmatically under a black hood as she prepares for her latest act of vengeance. This exclusive image comes courtesy of our sister publication Total Film magazine. Check out the new pic in full below:

For all the surface differences, Foy tells Total Film that there’s a surprising similarity between Spider’s Web’s Lisbeth and The Crown’s Elizabeth II. “There’s a similarity in what people would call a lack of feeling,” Foy explains. “People outside say they can’t show emotion. But they have the entire universe going on inside them. I realised that when I was playing Lisbeth. I thought I was taking on a role where I could be explosive and crazy. But then I realised, ‘No, I’m playing someone who’s emotionally immature. Somebody who is terrified of the world, and lives inside.’ Which is similar to Elizabeth.”

And talking of what’s going on under the surface, director Alvarez tells TF that Spider’s Web will explore aspects of Lisbeth that we’ve not yet seen on screen. “We wanted to know more about her past. And for someone who’s such a strong character, I was more interested in her weakness. What is the thing that breaks Lisbeth Salander?” he says. “In all the other stories she’s always tough, always composed, always in control. I wanted a bigger challenge that she couldn’t just shake off. And that means going to a more personal layer.”

The Girl in the Spider's Web opens in the US on November 9 and the UK on November 25, and you can read much more about it in the new issue of Total Film magazine which is on sale now. Inside you’ll also find the latest on Fantastic Beasts: The Crimes of Grindelwald and Bumblebee, as well as in-depth features and interviews for First Man, Halloween, Overlord, and much more.

And if you’re a fan of the mag, why not subscribe so that you never miss an issue? If you sign up, My Favourite Magazines will deliver every new issue through your letterbox before it hits shelves (with an exclusive subscriber-only cover like the one seen below), and you’ll save money on the cover price. What’s not to like?