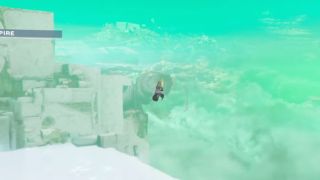 Guardians are almost superheroes already and this fascinating Destiny 2 beta glitch lets them go all the way. Discovered by Reddit user A_DVS_NTT and friends, the glitch lets you repeatedly "stack" the movement-altering effects of the Dawnblade Warlock's Daybreak super ability by dying during activation. With a couple of stacks your jump ability turns into a rocket booster.

With more than 20 stacks, gravity can't keep up and the world is yours. Look at the way their cloak whooshes around, it's like Warlocks were made for this.

A_DVS_NTT says Bungie has already been made aware of this glitch so you shouldn't expect to see it in the full version of the game. But there's a decent chance it will survive into the Destiny 2 PC beta - along with other old assets like the Turbines of Death - so you may be able to go Warlock-ing around the stratosphere once it goes live. Until then you can chill out with four minutes of out-of-bounds Inverted Spire exploration.

Make sure you're ready for the next stage of testing with our Destiny 2 beta tips, and read our Destiny 2 info article for everything you need to know about the game.