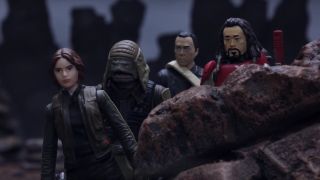 If for some reason you've yet to see any of the Go Rogue series, I urge you: stop what you're doing and go watch chapter one and chapter two. These fan-made animations come with the official thumbs-up from Lucasfilm, so we're not entirely sure how much of the shenanigans contain within are actually taken from the plot of Star Wars: Rogue One.

But really, does it matter? These stop-motion shorts are an absolute riot. Last week's instalment saw Jyn Erso and the rebels finally get their hands on the first part of the Death Star plans. Will they find part 2 of 2? Check out the latest episode below...

Just as LOL-tastic as the previous pair, episode 3 continues Jyn's story with a bunch of blink-and-you'll-miss-'em easter eggs tossed in for good measure. There's the ole headbangin' stormtrooper (yay!) and the pincode used by Director Krennic to open the case should ring bells for George Lucas die-hards.

With only two more instalments to go, I'm hoping that the powers that be will redirect the team behind Go Rogue and perhaps get them to do the same for Episode 8? Fingers crossed.