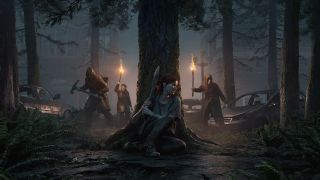 The Last of Us 2 PAX East demo is bringing enough game to justify the struggle for a demo booth slot.

Naughty Dog revealed today that it will bring an hour-long segment of The Last of Us 2 gameplay to the Boston convention: from February 27 to March 1, attendees will be able to try out a section of the game called "Patrol". This is the part of the game where Ellie and her girlfriend Dina head out of their home town of Jackson to clear out infected in the surrounding area - it sounds similar to the slice we got to try in our The Last of Us 2 hands-on preview.

The Last of Us Part 2 has been rated, and it sounds as graphic as you'd expect

Hour-long public demos for just about any game, let alone one as hotly anticipated as The Last of Us 2, are almost unheard of. It's a cool choice given its deliberate pace and the little bit of story Naughty Dog wants to reveal, though it does mean demo slots will likely be an extremely hot commodity. Your best bet at getting in will be to use the Experience PlayStation mobile app, as Naughty Dog says it will make new appointments available each day of the show. You might be able to grab a spot just by dashing to the front of the line as soon as the convention center's doors open, but no guarantees.

On top of it being the site of the last big show in North America before the game comes out, Boston is also where The Last of Us begins in proper (after a prologue in Texas). On top of that, it's where Naughty Dog first let fans play the original game back at PAX East 2013.

Naughty Dog has also confirmed that it's working with suppliers and retailers to make more copies of The Last of Us 2: Ellie Edition available - check out our guide on how to pre-order The Last of Us 2 for more details.

Find even more to look forward to in our guide to upcoming PS4 games.