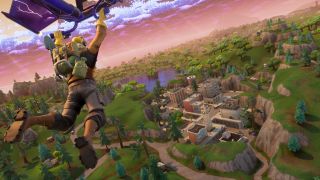 All 50 million players of Fortnite Battle Royale had a collective meltdown yesterday, when some new information casually appeared on the news page of Epic’s ridiculously popular free-to-play game.

It was only ten words in length, but that was all that was needed to get everyone talking about its implications; “Jetpack (coming soon): Take the fight to all new heights.”

So, yes, you’ll basically be able to fly in Fortnite Battle Royale by next week, as an official jetpack is being added to its multiplayer deathmatches. But what kind of wondrous hovercraft can we expect from Epic?

Will it be a legendary item that can only be found in chests and equipped for one-time use, like the bush camo? Or maybe it’ll be more common, and everyone will soon be zooming around Tilted Towers like a bunch of Boba Fetts.

One thing’s for sure; it won’t be a purchasable microtransaction, as Epic has committed to keeping those items purely cosmetic for the sake of Fortnite’s gameplay balance. If it was a purchasable advantage, there would be riots.

Then there’s the question of how the jet pack itself will actually feel to use. We could be talking constant streams of hovering power, Grand Theft Auto style, or limited energy use that basically allows you to perform super jumps, similar to Destiny or Halo. I’m going to put my money on the latter, as the idea of eternally airborne combatants sounds like a nightmare for anyone stuck at ground level.

And finally, how might this new addition change the dynamics of fire-fights in Fortnite Battle Royale in general? Previous game-changers like the minigun and launch pad carved out new avenues to victory for players, and the same could well be the case for the jetpack if it allows its users to master the inevitable verticality of Fortnite's crafting-focused combat.

Typically, Epic announces a new Fortnite Battle Royale item around a week before it comes to the game itself, so you can probably expect to see it arriving by Thursday, March 8 at the latest.

In the meantime, the season 3 Battle Pass has been live and active since last week, so you can bide your time by levelling up those tiers and working towards that awesome John Wick costume. John Wick with a jetpack? Now there’s an idea for the threequel...