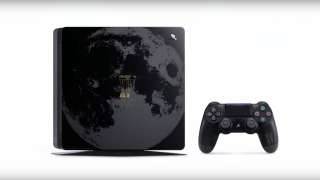 Original story: Say hello to another special edition we probably won't see in the west. The Final Fantasy 15 Luna Edition is the first special edition version of the new slim console and has a rather lovely image of the moon. Revealed by Final Fantasy producer Hajime Tabata at this morning's PlayStation conference, the console will be out on November 29 alongside the game.

The imagery is inspired by the scene of Noctis gazing up at the moon and be glad you won't have to carry it about lots because just look at those fingerprints. If you're considering importing, the cost is 39,980 yen so $392 or £295.