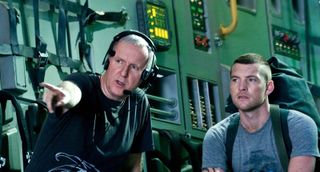 James Cameron is a man with a plan, and he's determined to see it through.

Last week the director announced that he plans on making four Avatar sequels, and now it's come to light that he plans on making all four movies at the same time. “It’s not back-to-back. It’s really all one big production", Cameron explained to Famous Monsters of Filmland. "It’s more the way you would shoot a miniseries. So we’ll be shooting across all [Avatar scripts] simultaneously. So Monday I might be doing a scene from Movie Four, and Tuesday I’m doing a scene from Movie One".

"We’re working across, essentially, eight hours of story. It’s going to be a big challenge to keep it all fixed in our minds, exactly where we are, across that story arc at any given point. It’s going to be probably the most challenging thing I’ve ever done. I’m sure the actors will be challenged by that as well. It’s like, ‘No, no, no, no, this person hasn’t died yet, so you’re still in this phase of your life.’ It’s a saga. It’s like doing all three Godfather films at the same time.”

Cameron also confirmed that the reason his Avatar films will be released a couple years apart is because of a certain Star Wars franchise; “My original plan was to release them a year apart, but we’re opening that up. If for no other reason than that I don’t want to land on the same date as one of the Star Wars sequels. That wouldn’t be fair to them. [Laughs] No, that’s just good business. I don’t want to go head-to-head with Star Wars. That would be stupid. And hopefully they won’t want to go head to head with us.”

While it's going to take a lot to get me excited about an Avatar sequel, it's hard not to admire Cameron's dedication to seeing out his vision to the best of his ability. Shooting all four movies at once is insanely ambitious, but not unheard of - Peter Jackson adopted a similar method while filming The Lord of the Rings trilogy - but hopefully Cameron is up to the challenge.

Directed by James Cameron and starring Sam Worthington and Zoe Saldana, Avatar 2 is likely to be released in December 2018.