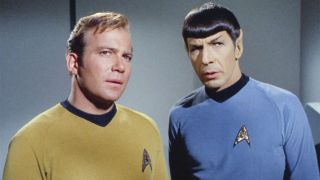 The idea of Quentin Tarantino putting his own spin on the Star Trek universe has been all over the news lately. It's still not officially happening, but there is a chance that the director takes the reins on a very special journey into space.

Rumors have swirled all over, but right now the script written by The Revenant writer Mark L. Smith is the only progress we've seen on the project. Paramount hasn't approved it and Tarantino hasn't agreed to direct anything. He has said he will work on the script once everything is done with in Once Upon a Time in Hollywood, his latest movie starring Brad Pitt and Leonardo DiCaprio.

In a long interview with Deadline covering a number of topics, Tarantino spoke about his vision for an R-rated Star Trek, the script making its way around, and how annoying Simon Pegg has been.

Tarantino also discussed his love for the Star Trek show and William Shatner, although he hasn't decided if he wants to helm this movie yet. He did mention that there was a "gangster" element in the current script, so I'm excited to see that play out if he chooses to direct.