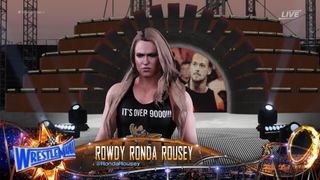 There's one apparent downside to Ronda Rousey making her in-ring WWE debut at WrestleMania 34 this weekend: the inability to play as her in a wrestling game until WWE 2K19. Except that isn't actually the case. Thanks to WWE 2K18's Community Creations feature, you can utilise Rousey, and other new faces such as Absolution's Mandy Rose and Sonya Deville, inside the virtual squared circle right now.

Community Creations enable you to download wrestlers made by other dedicated wrestling fans, thereby filling in gaps from the current WWE roster, or creating a custom catalogue of ECW, WCW and TNA bruisers. With 100 slots to fill and thousands of fan-made grapplers to choose from, it can take time to sort the elite from the excruciating – so GR+ has done the hard work for you. Below are 15 of the best ‘CAWs’ I’ve found during my hours spent with the PS4 version of the game, just in time for WrestleMania weekend…

MrHellInBoots can lay claim to being the most proficient CAW-maker going when it comes to female superstars. His versions of Tessa Blanchard, Bianca Belair, and Zelina Vega should all be immediately added to your roster. Best of all are the Absolution pair of Mandy Rose and Sonya Deville. Collectively known as Absolution, both will make their WrestleMania debuts in the inaugural Women's Battle Royal.

The Hulkster was rightly exiled from WWE three years ago after being caught on tape making racist remarks, but rumours abound of a comeback in 2018 – perhaps even during WrestleMania itself. Talented creators have pre-empted this possible return with a number of in-game doppelgangers, of which DrGorillaNuts’ red-and-yellow incarnation trumps all.

PH_Guy is forging a reputation as one of the most talented creators around – and the reigning NXT Champion represents his best work. In addition to Almas, his other essential downloads include Pete Dunne, Ariya Daivari, Cezar Bononi and Mustafa Ali.

For the second year in a row this three-time WWE Divas Champion features on our list of essential downloads, with SOLID-SNAKE618 claiming credit. Lee, like husband CM Punk, left the company on cloudy terms in 2015, and is therefore unlikely to again feature in a 2K game as a licensed character.

The first Kairi Sane uploaded to Community Creations back in October has now amassed 56,800 downloads – but you need to look a bit deeper to find her most realistic likeness. Step forward III-A-N-T-I-III, who has created the Japanese fighter sporting both her current NXT treads, and previous World Wonder Ring Stardom garb.

One of the big head-scratchers relating to the WWE 2K18 roster is Million Dollar Man’s status: for the second year in a row he’s included, but only as a non-playable manager. While no explanation for this has been offered by 2K, DrGorillaNuts has taken matters into his own hands, carving an unofficial likeness almost as detailed as his real one.

Ronda Rousey's first match is naturally an area of focus for the mainstream media, and guarantees WrestleMania coverage from serious sports sites such as ESPN. But it's also a big weekend for real-life friend and fellow UFC alumni Shayna Baszler, as she goes up against Ember Moon for the NXT Women's Championship at NXT Takeover. These CAWs are by MacRooster_22 and SOLID-SNAKE618 respectively.