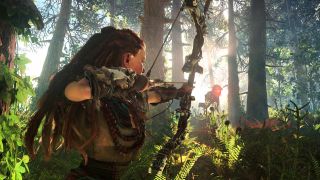 Titan Comics has announced some of the titles that will fill out its line-up for Free Comic Book Day 2020. The first is a one-shot comic continuing the story of its ongoing Blade Runner 2019 series, but the other will mark the first instalment of a brand-new comic book series based within the world of PS4’s Horizon Zero Dawn.

Pitched by Titan as an exclusive lead-in story to a wider series, the blub makes clear that this first issue won’t be set before or during the events of the hit game, but rather in its immediate aftermath. “Discover a far-future Earth full of epic natural beauty,” it teases, “where awe-inspiring machines are the dominant species.”

The synopsis carries on: “Talanah, Sunhawk of the Hunters Lodge, struggles to find purpose after Aloy, her trusted friend, disappears. When a mysterious new threat emerges in the wilds, she returns to her roots as a hunter to defeat it, only to learn that a whole new breed of mechanized killers stalks the land.”

Those wondering whether this sequel story will be worthy of the Horizon Zero Dawn name seemingly shouldn’t worry, as its been revealed that the series is being penned by Anne Toole, who was one of the writers to have worked on the main game. Titan Comics appears to be pulling out all the stops in terms of achieving authenticity.

You can expect to pick up this first issue of the Horizon Zero Dawn comic book on May 2nd, alongside a whole host of other freebies set to hit shelves in honour of Free Comic Book Day 2020. Here’s hoping it can whet our appetite before the arrival of PS5’s inevitable sequel.

See how Horizon Zero Dawn ranks on our list of the best PS4 games to play right now.