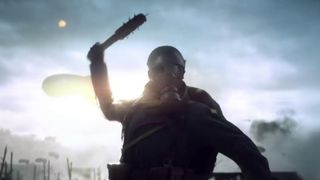 It's telling that the opening shot of the Battlefield 1 reveal trailer is some poor sap being bludgeoned to death by a spiked mace. Moments later, a soldier gets a shovel to the face in much the same savage manner. Melee weaponry is going to be a huge focus in DICE's upcoming WW1 shooter; blunt objects and blades of all kinds will be a crucial part of customizing your preferred loadout. And while I'm excited for melee armaments actually making a difference, rather than the catch-all, one-hit-kill executions of knife attacks in Battlefield 3 and 4, I'm even more jazzed about the implications for that antithesis of close-quarters combat: sniping. More specifically, I've longed for a Battlefield that isn't littered with solipsistic sharpshooters who seem to forget that they're playing a team game.

Now, I'm not against sniper rifles as a rule; the Sniper is my go-to class in Team Fortress 2, and I can certainly appreciate the thrill of nailing those long-distance shots that feel like threading a needle from 1,000 meters. The function of a sniper in objective-focused team games is easy to understand: they specialize in sapping enemy morale. When you step onto a capture point and some unseen enemy immediately puts a bullet through your brain, the natural response is to avoid going back to that territory at all. And when you have to try and take that point even while a sniper keeps plugging you from afar, you're bound to get frustrated - which is exactly what that murderous marksman wants, because a frustrated opponent isn't playing at their best. It's not like sniper rifles are idiot-proof, point-and-shoot killing machines, either: just like real life, it takes serious skill (and practice) to consistently line up headshots in Battlefield, considering you have to account for bullet drop, lead your moving targets, and hold your breath to steady your aim.

But sniper rifles are like the FPS equivalent of megaphones: fun for the people using them, and terribly irritating to everyone else. That typically goes for opponent and ally alike: enemies are suffering from the aforementioned annoyance of suddenly dying because of a threat they had no way of reacting to, and teammates often view their snipe-happy cohorts as dead weight. A marksman's strength is that they can inflict damage while keeping themselves at a totally safe distance, which usually means that they're completely isolated from either team's location. And in a shooter where teamwork is king, as in Battlefield, a lonesome long-ranger doesn't seem to contribute much in the grand scheme of things. In my BF experience, the general perception of snipers is that they're playing their own game: instead of working with others to gain map control and lift the team to victory, snipers seemed to be more preoccupied with their Kill/Death ratio than ultimately winning or losing. Short of purposefully griefing your allies, that's the furthest thing you can be from a team player.

The other problem I've faced in BF games is that sniping tends to spread through a server like a fun-killing virus. For all but the most experienced players, it can feel like the only way to get back at the enemy sniper who just dropped you is to fight fire with fire - take up a sniper rifle of your own and give those cowards a taste of their own headshot medicine. In a vacuum, these long-distance vendettas (which I've taken to calling Sniper Duels™)  are an interesting interplay between budding rivals, who are focused solely on eliminating the other player before taking potshots at new targets. But in the context of a team game like Battlefield, where objectives and unity determine the outcome, the players locked in this battle of ranged domination aren't having any effect on the big picture - and every time they snipe someone else, there's a chance that they'll inspire another would-be marksman to take up their telescopic sights and propagate the cycle. The more snipers there are on each team, the further the match will be from the way Battlefield is intended to be played. One of DICE's lead game designers Daniel Berlin has stressed how, when it comes to class roles, "that rock-paper-scissors quality is important". But snipers seem to exist outside of that tried-and-true balance scheme, countering and only contributing to themselves.

Zoom back in to close-quarters combat. There's an undeniable satisfaction to rushing at someone's face and punching/walloping them into submission; to get up close and personal for a kill in a genre that revolves around mid-range skirmishes. If you've made it to this intimate range alive, something extraordinary has happened: you must've employed some ninja-like stealth, bullheaded bravery, or utter desperation to be where you are now. And (what you imagine to be) the surprised look on the other player's face - when you kill them with something far more tangible than ballistics, like a mud-covered spade or the pointy end of a bayonet - is your just reward. That, and an everlasting keepsake commemorating your close-up kill, which snipers can never collect: the dog tags around your victim's neck (which did exist back in WW1, in the shape of circular disks rather than the rounded rectangles of modern day). You have the chance to smack down your target in a moment of melee glory... or maybe you'll just flail around like a twit before being swiftly gunned down. You really don't know until you try, and that's always exciting.

BF1's bayonet charge plays to this sensation perfectly, introducing an all-or-nothing melee mechanic that sounds like it'll either skewer an enemy or doom you to a humiliating death. Speaking to Eurogamer, DICE producer Aleks Grondal said that, "Anyone who gets stuck in your way is probably going to have a hard time... [but] if you miss, you really miss. That adds another type of flavor when it comes to the close quarters combat." Whether you stab your mark or miss it completely, it sounds like a memorable experience, especially given how it stands apart from typical FPS gameplay. Of course, an easy way to ruin that thrilling high point is to get nailed by some camper who's halfway across the map before you can get in range of the enemy you're actually charging at. And given how much effort and attention DICE is pouring into the revamped melee mechanics, it's doubtful that it would facilitate the kind of sniper-favoring ecosystem that would render those new gameplay elements ineffectual (and therefore unappealing).

And that's the heart of it: close-quarters combat leads to memorable conflict no matter which side of the weapon you're on, while being a sniper's prey is a moment you'd rather forget. The Battlefield series has always benefitted from its community's passion for sharing harrowing war stories, of how they swapped jets by gunning down an enemy pilot in midair, or strapped C4 to their own jeep to create an explosive battering ram. And unless you're among the elite few who's actually ace with a sniper rifle, those long-distance kills usually don't lead to stories worth retelling. But when BF1 debuts and buffs up the power of melee, I expect plenty of players will be enthusiastically regaling each other with tales of how they survived a clash of swords amidst a swarm of gunfire, or shish-kebabed two opposing soldiers in the narrow trenches. And that sounds like just the kind of Battlefield environment for me.