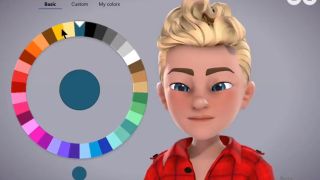 A leaked video showing off the updated Xbox Avatars has been making its way around the web today, giving Xbox One owners (and Windows 10 users, though let's be honest about who's really going to be using these things) a taste of what they can expect once the system goes live. The original video has since been removed from YouTube, but we all know that once something like this is out there, it's out there for good.

Now the leaked preview is being shared via Twitter, and you can view it for yourself below:

Microsoft first revealed its updated Avatars back during E3 2017 with a trailer showing off characters that were more detailed and featured more customization options than their 2008 counterparts. While these revamped digital representations of self were originally slated to arrive that fall, it was announced in November the system would be delayed to "early" 2018. Judging by the quality of this leak (and the fact that it won't be early 2018 too much longer) it looks like we can expect the Avatars to drop reasonably soon.

Unfortunately, there doesn't seem to be any news regarding the rumored Career system said to be tied into the new Avatars. According to Windows Central, the Career system would let you level up your profile, thus earning yourself loot boxes containing cosmetic flair for your Avatar. As of Windows Central's January report, these loot boxes could not be purchased for real-world money - however, we can see in the leaked video that Avatar cosmetics such as hairstyles and clothing are broken down into "Basics" and "Purchases."

It's possible the Career system will never materialize as reported (maybe it'll sell loot boxes for real-world money or maybe it won't even be available to the public at all), but regardless it would seem that not everything tied to the new Avatars is going to be free.

As for what you'll do with your new Avatar once you've got one, you'll be able to see them popping up across your dashboard, use them as your profile picture, and use them as your... well, avatar in compatible games. So, pretty much everything the old Avatars did.

The Verge reports that Xbox employees already have access to the new Avatars, and that members of the Xbox Insider Program will also get a foot in the door early before the system rolls out in full sometime in May. Personally, I'm excited.