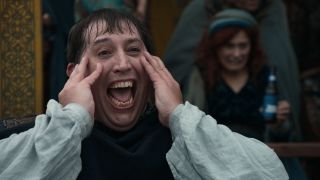 If there’s one thing you should never do, it’s get people’s hopes up. HBO proved that last night after an expected Game of Thrones trailer premiere came and went and, well, it was just a beer commercial with a few clever callbacks.

Not quite the big Game of Thrones season 8 look we all wanted – and fans weren’t happy, especially as some of the other trailers at least showed something. Here are some of the best reactions to the Game of Thrones/Bud Light Super Bowl ad that never was.

What *were* they drinking?

So, yeah. The Game of Thrones Super Bowl TV spot was, in effect, tossed to one side in favour of a Bud Light commercial involving the Mountain and some jousting with the Bud Knight. Not quite what people were anticipating, that’s for sure.

Patriots won and we didn’t even get a Game of Thrones season 8 trailer. How awful. Terrible superbowl. #GOT #SuperBowl4 February 2019

@GameOfThrones seriously. The only thing we get with the superbowl is a bud light advert 😂😂 Disappointing4 February 2019

HBO are being some real trolls right now lol4 February 2019

A cry went up, one that could be heard from Westeros and beyond: We want the trailer. It flooded HBO’s official replies on Twitter as well as the rest of the social media – and it’s a message that will prove to be quite popular in the next few weeks leading up to April 14, I’m sure.

we want the trailer4 February 2019

WE WANTED A TRAILER4 February 2019

Ok, @HBO! Now where is the trailer for @GameOfThrones season 8? #ForTheThrone #SBLIII4 February 2019

wHeRe Is mY TrAilEr pic.twitter.com/nQJ64f5vLu4 February 2019

what if we get an endgame AND a game of thrones trailer tonight pic.twitter.com/WfnUZ5v7ph3 February 2019

So I (barely) watched the entire super bowl for no real game of thrones trailer.4 February 2019

Not everyone was disappointed

Whisper it, but the advert was actually pretty decent – this just wasn’t the time nor the place. It may have even been the best Super Bowl ad this year according to some…

When Game of Thrones and Bud Light come together for the best Super Bowl commercial pic.twitter.com/72vWMRZ7BC4 February 2019

OK... killing the @budlight Knight in a combo promo for @gameofthrones was marketing magic at its best. #forthethrone4 February 2019

best superbowl commercial this year HAS to go to the game of thrones season trailer. no competition.4 February 2019

All men must die, even the Bud Knight

Of course, you can’t have a Thrones trailer (even a joke one) without a shocking death or two. RIP Bud Knight. We’ll be pouring a cold one out for you.

Game of Thrones writers are such savages, now they’re killing people who aren’t even on the show.RIP, Bud Light Knight.4 February 2019

@GameOfThrones so is the Mountain killing the Bud Knight canon? Where does it fit into the timeline? Were house Lannister and house Targaryen momentarily allied soley to murder a Beer man? Pls respond this changes everything about my understanding of the show4 February 2019

Be sure to raise a glass to our look at Game of Thrones theories. Plus, if you have the bottle, we even have some juicy quotes about the Game of Thrones ending for you to pore over.