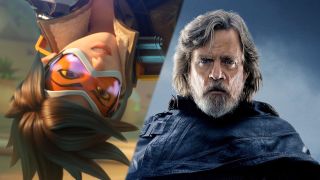 Rising in the wake of the cinematic inspiration-fest that was #FilmStruck4, video game creators and fans joined in with a hashtag of their own: #GameStruck4. Or #GamesStruck4. Or #GameStuck4 - listen, sometimes typos happen on the internet. Whatever you call it, the hashtag gives us a great look inside some creative minds in and around this industry, letting us draw some otherwise unexpected lines between games of old and exciting new projects on the horizon. First up is somebody who you've almost definitely heard of, even if their game picks are a bit more obscure.

Johnson's picks split the difference between the arcade action of Megamania and Lode Runner and the enigmatic adventures of Mystery House and Trinity - the last one is particularly notable as a poignant exploration of the futility of atomic war. It isn't hard to see the same tastes at work in Star Wars: The Last Jedi, as it spans grand battles and quiet moments of self doubt.

I'm not entirely satisfied with these choices, so I'm reserving the right to update this. (Probably with EarthBound.) #GameStruck4 pic.twitter.com/VA0Y9SLnQTApril 19, 2018

With the semi-exception of Animal Crossing, these are all very narrative-focused games, which makes sense as inspiration for a young writer (Animal Crossing has stories too, just few pre-written ones). They also all feature characters from very different walks of life coming together as friends and allies - the backstory of Overwatch in a nutshell.

Em Schatz, The Last of Us Part 2 co-lead designer

#gamestruck4 I almost replaced Breath of the Wild with Link to the Past because I’ve been so irritated by the dlc 😒But I love it so. pic.twitter.com/kn4NUnPQCOApril 19, 2018

Em Schatz has appeared in the credits for Naughty Dog games since Uncharted 3: Drake's Deception, and you're going to hear a lot more about her now that she's co-lead game designer on The Last of Us Part 2. Her picks blend ambient adventure and strong storytelling in a way that seem to lead naturally to her modern role in shaping Ellie's continued journey through the picturesque post-apocalypse.

Edmund McMillen's best-known games are nostalgic and morbid, jolly and grotesque. Both Fallout and Doom likely contributed to his healthy love of gore and dark humor, while the pair of NES classics he picked both have clear analogues to his modern output: the smooth platforming of Mario and Super Meat Boy/The End is Nigh; the deadly room-by-room adventure of Zelda and The Binding of Isaac.

Geralt, Witcher of The Witcher

Looking for some more modern far to enjoy after indulging in all these classics? Peruse our list of the best games of 2018 (so far) and see if you can spot some influences yourself.