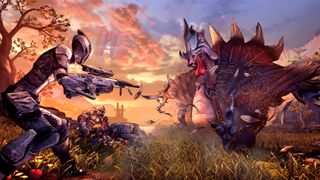 Oh, Borderlands. A filthy bastion of irreverent humour and weaponised absurdity. Truly a pioneering game in its heyday, even the original holds up as an utter riot with friends in co-op. The core premise is simple, but the world is so vibrant and full of life that it stood out and burrowed its way into the gaming subconscious. Nowadays, the once unique concept of the shared-world looter shooter has been boiled down into mush, with plenty of developers wading into the fray to capitalise on its popularity. Here are 10 games like Borderlands you should try once you're bored Gearbox's particular brand of looty shooty.

Easily the most popular looter-shooter since Borderlands, Bungie gave the genre a more serious coat of paint with Destiny, its fantasy space epic which invoked the best of Halo’s first-person combat and mashed it together with a shared open-world that trumps Pandora for scale and scope. If you’re looking for a more hands-on, particular progression system and MMO-style end-game content, Destiny 2 will be right up your street. It’s also got some excellent PVP gameplay up its sleeve in The Crucible if you’re tired of playing nice and want to frag your friends instead.

An old school shooter that is just as fun to play with a good group of friends, Serious Sam predates Borderlands by quite some time but is strikingly similar in its daft tone. The unmistakable hum of Beheaded Kamikaze’s rushing at your co-op cabal will soon become a constant as you’re filling waves of terrors full of lead. Whilst it can’t keep up with Borderlands’ roster of guns, the arsenal on display is full of satisfying shotguns and explosives. The charming, often aloof environments and the unique enemy design should keep you coming back for more - there’s nothing quite like tearing through an army of invading aliens with your mates in tow.

An indie darling with a devilishly addictive Borderlands-esque gameplay loop, Risk of Rain 2 is the 3D sequel to Hopoo Games’ Game Maker smash hit that allows for four-player co-op and intense item management. You can curate builds and play as a suite of different characters who each have their own complementary skills. Each level is like a more contained Borderlands mission, complete with its own bombastic boss battle as you risk it all to defend the teleporter that allows you to move between worlds. With a limitless difficulty slider and interesting roguelike mechanics and curious secrets, Risk of Rain 2 would be a natural fit for Borderlands players looking for a refreshing spin on the formula.

Tales From The Borderlands

For the Borderlands fans who can’t quite get enough of the game’s writing style and rich world, Tales From The Borderlands is Telltale’s narrative adventure set within the confines of the game’s lore. With a host of vibrant and well-written new characters (and plenty of cool cameos), it’s hard not to get wrapped up in the fast-paced story, which rushes between set pieces and delivers wit, humour and adrenaline in a more relaxed package. Whilst it doesn’t have any of the gunplay you might be used to, it’s still a gripping tale well worth playing through, especially if you want to get a grip on some of the new characters landing in Borderlands 3.

Bethesda’s latest is a sequel to the woefully dull but mechanically sound Rage, which seems to have absorbed all of the colours of the rainbow in the washing machine and upped the ante in terms of absurdity, taking a leaf out of the good book of Borderlands. Whilst it’s characters can't quite compete in the charm department, they’re certainly something to look at as you careen through the varied environment mincing through grunts with your superpowers. A staunchly solo experience, Rage 2 distances itself from Borderlands’ looter-shooter roots but will delight players looking for crunchy gameplay and a more contained narrative. The ability to dash and weave around compounds to get the drop on unsuspecting enemies might be just the remedy for a shooter fan burnt out on Borderlands.

A more serious and refined version of the looter-shooter, The Division 2 much like grafts a lot of welcome MMO-lite features into the fray and frames it around a very hawkish, totally not political take on a dystopian Washington D.C. Whilst the grim story leaves a lot to be desired, it makes up for it by providing extremely satisfying gameplay. The feeling of shooting itself is addicting, and the feedback loop and gear slots will keep you scavenging and coming back for more, especially if you convince some friends to join you. The Dark Zone is its main unique pull, a social experiment in misdirection and betrayal that could lose you some good comrades if you don’t play your cards right.

Polish game developer People Can Fly were well known for their affinity for stylish shooters following the release of the excellent Painkiller, but this belief was later cemented by Bulletstorm, one of the more unique new I.Ps to arrive in the last decade. An arcade experience with co-op score attack functionality, the game is excessive in every sense, rewarding the player for being creative in their approach towards turning legions of grunting foes into red mist. Borderlands is clearly its nearest neighbour given the tone and stylish gunplay, which means fans of Gearbox’s shooter series will feel right at home in its silly world.

Available on: PS4, Xbox One and PC

Swapping the first-person perspective for a top-down birds-eye view, Path of Exile is a free to play MMO that mirrors Borderlands in its loot-focused feedback loop and intricate skill tree system. If you’re looking for more complex systems and boundless, reliable content to sink your teeth into - Path of Exile has this in droves, and it’s all playable in co-op with your friends. Whilst Borderlands invented the looter-shooter, the genre certainly owes a lot to loot-based action RPGs like Diablo, which heavily inspired Path of Exile. Yet, instead of opting for a very safe fantasy setting, Path of Exile’s unique grimdark world stands out, giving it a potent sense of self that should be very `attractive to Borderlands fans.

A third-person action title that has exploded in popularity over the past few years, Warframe is a free-to-play funhouse where players design their own ancient space warriors and collaborate to complete procedurally-generated missions, upgrading their capabilities as they progress. Warframe has one of the best online communities and the game is receiving constant updates, with the developers consistently adding exciting new features via expansions that shake up the gameplay and narrative. The game is more accessible than ever before now, with the shooter available on the Nintendo Switch as of late 2018 - it provides a similar buzz to Borderlands and is well worth a look if you want an ambitious looter shooter that gives you plenty of reasons to come back for more.

If you’re in need of a break from the run and gun chaos and want more tactics and stealth in your co-op shooter, Payday 2 should be at the top of your list to play after you’re tired of Borderlands. Whilst you can go loud if necessary, the focus is on communication and sleuthing as you curate skill trees and create the perfect criminal combos to unravel high-security banks and compounds. Each reactive heist can fall to pieces in seconds, creating a palpable sense of adrenaline in each map. With some fun aesthetic loot mechanics and a similarly silly tone, Payday 2 is well worth it if you have a dedicated group of friends who want a change of pace from Borderlands for some switched-on tactical gameplay.