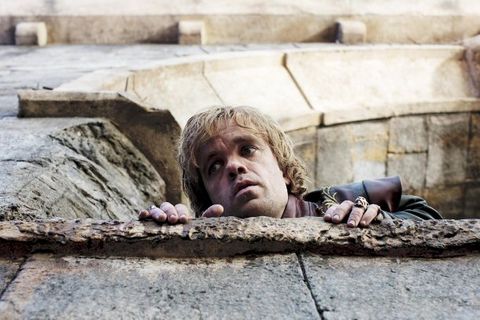 The One Where: Ned is in charge while King Robert goes on a hunt, and Viserys Targaryan finally gets his golden crown.

What Works: What with Daenerys’s horse heart-eating initiation, Ned’s heavy-handed deliverance of justice from the Iron Throne, Tyrion’s trial (Peter Dinklage continues to impress) and Viserys’s brutal ‘crowning’ at the hands of Khal Drogo, you’d be hard pushed to find a more entertaining hour of television. Intense drama, high politics, elaborate murder, strange rituals, a sprinkling of comedy and some deft plotting make the hour fly by, and when it’s finished you’ll want to head straight back to the start. It’s a flawless piece of television pulled off with the style and confidence of a major big-screen event, which pushes each of the key plot lines into a new dimension and keeps the viewer hooked from the stunning title sequence to the shocking finale. Now that we’re all comfortable in Martin’s elaborately constructed world, things are hurtling along at an impressive lick, building a sense of momentum behind the show that it is genuinely exciting to be a part of.

Ushering in the second half of the season with a jolt, it’s hard to pick out which incident across the course of this episode will have the farthest reaching consequences. On the one hand, it’s now clear that the real threat across the sea is Daenerys; she’s tougher than her brother ever was (could you scoff down the bloody mess that she does, and in front of the in-laws as well? Thought not…), and she now knows for sure that she is the true last dragon, not Viserys. She refuses to step in to stop her brother being given a whole new type of golden shower by her brutish yet unquestionably imaginative husband - proof that she is capable of being just as ruthless as Robert Baratheon when she needs to be. Who knows what the diminutive Targaryen princess is capable of next, especially with Khal Drogo and his horde now wrapped round her pinky.

And yet, back in the seven kingdoms, the unlikely harbinger of doom is Ned Stark. By sending out troops to apprehend Ser Gregor Clegane, the monstrous horse decapitator of legend, he’s basically started a war. Which is pretty impressive, considering the king has been gone for all of five minutes; has Ned sewn the seeds of his own downfall? Or can the hard-headed Stark bring order to Westeros where Robert couldn’t? By first fighting Jaime Lannister and now going after the Hound’s psychopathic brother, he’s not exactly picking his battles wisely, although the man is under so much pressure (something that is write large across Sean Bean’s pained expression) that the odd dodgy judgement call is inevitable. I personally can’t wait to see El Bean open up an enormous can of ass whoopery; it’s about time - once that leg is healed let’s see him taking a crop of heads with that frankly enormous broadsword we saw in episode one, and asserting a bit of order.

Up at the Eyrie, Tyrion once again proves himself the most amusing character in the show by a country mile, and the smartest. He manipulates his situation brilliantly, calling for a trial by combat when he would certainly have been lobbed head first out of the moon door if he’d had to face Lysa’s judgement. Having been unjustly imprisoned and his family name dragged through the muck, the wily Imp could well prove to be the most dangerous of the lot now that he’s free.

The Stark’s have got a serious spread of Lannister-shaped problems coming their way, and soon, especially now that the penny has finally dropped for Ned about the Baratheon lineage (through a nice bit of interaction with Sansa, who unwittingly outs her betrothed as the product of some incestuous rumpy pumpy). The Starks and the Lannisters are a dirty look away from all out war, there are dark days ahead, and I can’t wait. Winter is coming indeed.

What Doesn’t: The comedy bad guys that accost Bran appeared to have walked straight off the set of Maid Marian And Her Merry Men, and were about as intimidating.

And it’s sad to see Harry Lloyd shuffle off this mortal coil as he's been a joy to watch as Viserys, but really, what a way to go.

Don’t I know you? Almost unrecognisable as sword-for-hire (and saviour of Tyrion Lannister) Bronn, Jerome Flynn kicked more ass that he ever did in Soldier Soldier.

Tyrion Lannister: “When I was 12, I milked my eel into a pot of turtle stew. I flogged the one eyed snake, I skinned my sausage – I made the bald man cry into the turtle stew, which I do believe my sister ate.”