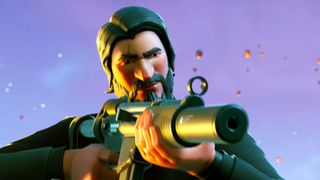 Did you ever want to dress up like John Wick while you blast fools and build ramps? Don't answer that question, of course you did, and Fortnite Battle Royale season 3 has finally arrived with all that and more. The latest update for the competitive shooter (and its co-op Save the World counterpart) brings with it equal parts gameplay tweaks and new stuff to play with, and there's never been a better time to start playing or skydive back in. Here are six of the biggest ways Fortnite Battle Royale season 3 changes the game for the better.

A new Battle Pass gives you more to play for

Let's be real: the last season of Fortnite Battle Royale offered some pretty middling skins, though there were a few standouts if you fancied flashing like a disco ball or cosplaying as a medieval knight. The new Season 3 Battle Pass outfits is nonstop bangers, especially the just-short-of-copyright-infringement Rust Lord skin, which looks a bit cooler than its Guardians of the Galaxy inspiration if you ask me. The variety extends beyond skins with new customization options like skydiving trails and "back blings" (AKA accessories you wear on your back) across all 100 tiers. And the weekly challenge system is much more casual-friendly than the old exclusive daily challenges to boot.

How many times have I clicked at the wrong time while building ramps and fallen to my death, or run out of one material and got shot before I realized I could swap to the next? The answer is "not that many" because I kind of suck at Fortnite Battle Royale and usually die for more mundane reasons. But I know for a fact that better players really hate those little bumps in the building system! Update 3.0.0 makes a couple seemingly small but massively helpful tweaks in that regard: simply hold the button and you'll keep slapping down structures wherever you look. Run out of materials and you'll automatically swap to the next one. And finally, you can build right through existing props like vehicles and trees just like terrain - it won't destroy it, it'll just clip right through it. No more tiny tree branches ruining your architecture!

Doesn't matter whether you're playing on one of those fancy new 4K systems or a vintage model, every console version of Fortnite Battle Royale now runs at 60 frames per second by default. You can always pop into Settings and drop it back to 30FPS mode if the sacrifices in visual quality aren't worth it for you, so compare it yourself and decide. This is a cool move on Epic's part and I hope more console games take a similar approach to optional performance tweaks in the future.

Pistols have been in a weird place in Fortnite for a long time; never quite as disliked as SMGs, but rarely the pride of anyone's arsenal. With Update 3.0.0, a new handgun may soon be number one with a bullet: the Hand Cannon, which fires heavy ammo and kills stuff super hard. It comes in both Epic and Legendary forms and can be found loose on the floor, in chests, and in Supply Drops. The overall Pistol Meta (that's a thing, right?) is getting a shakeup with some tweaks to drop rates too: more Rare Pistols, fewer Epic and Legendary Suppressed Pistols.

The 'double pump' is the kind of dirty trick that's so effective you couldn't really argue with it. Like, why wouldn't you quickly swap between a pair of powerful shotguns to circumvent their pump time, AKA their one drawback? It works! Except it doesn't any more, because as of update 3.0.0 you still have to pump between shots even if you switch weapons. Epic says it will monitor how that impacts the gun's performance, but I think the close-up stopping power of pump shotguns will keep them in many players' inventories - it just won't feel quite so cheap dying to a pair of them.

You fought hard to take home the win, so it's only right that you get a little bit of time to celebrate in your own way. Or maybe you hid in a bush the whole time then plugged the person who fought hard. Either way, the final victor(s) now remain in control of their characters for 10 seconds after the end of a match. Dance emotes will be a popular choice, I'm sure, but real MLG 420 No Scope Pro Gamers will build their own discotheques first.