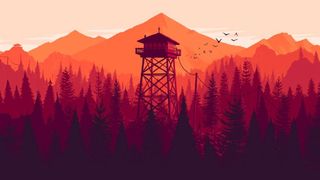 I understand the appeal of seeing blockbuster games like Warcraft, Assassin's Creed, and even Angry Birds come to the big screen. They have big, flashy stories with lots of action and characters you just don't find elsewhere. So count me as more than a little surprised when The Hollywood Reporter revealed that Campo Santo's Firewatch will be getting a film adaptation.

Yep, first-person mid-life crisis in the Wyoming wilderness simulator (or FPMLCWWS for short) Firewatch is going to become a movie, courtesy of a partnership between Campo Santo and Good Universe, the production company behind movies like Don't Breathe and Neighbors 2: Sorority Rising.

"It's rare you meet another group that shares so many of your values and makes the process of creating things even more exciting. We can't wait to see what we make together," said Campo Santo founder Sean Vanaman of the deal.

The Firewatch movie has no script, cast, or release window, but if the upcoming Assassin's Creed movie falls through, it'll still have a chance to be the first good Hollywood video game adaptation.