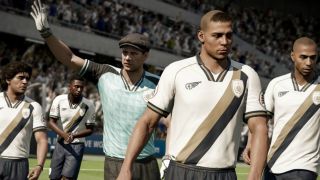 Following the ace news that Ultimate Team legends are coming to PS4 for the first time in FIFA 18, publisher EA Sports has revealed the names of four past greats who'll be playable: Pele, Diego Maradona, Lev Yashin, and Thierry Henry.

It takes the number of legends – or Icons, as they're now known – confirmed for this year's game to five, with Brazilian favourite Ronaldo announced last week.

In previous years these classic players were exclusive to the Xbox version, but from FIFA 18 onwards they're headed to all formats. You can see how the fab four look in-game by watching the trailer below:

Pele (Brazil), Maradona (Argentina) and Henry (France) are among the greatest outfield players to ever take the field, and will be highly sought-after cards from day one. Soviet keeper Yashin may be less well known to younger fans, but is considered the best netminder of the 20th Century. In a neat touch, his character model wears a cap onto the pitch, just as Yashin did for most of his career.

FIFA 18 is released on 29 September, and you can read my extensive hands-on impressions by clicking here.