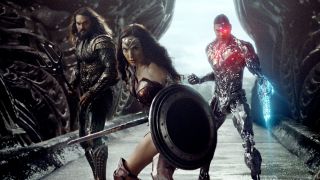 It's been all quiet on the Justice League front of late, but all that's about to change because the new issue of Total Film magazine - out this Friday - contains a world exclusive look at DC's upcoming blockbuster team-up movie.

What's that? You can't wait until then? Well, it's a good job we have an exclusive new image to keep you entertained until then. Feast your peepers on half the (meta)human League in action below.

Gal Gadot’s Wonder Woman is leading the charge, flanked by Jason Momoa’s trident-wielding Aquaman, and Ray Fisher’s Cyborg, who's picked up a snazzy, luminescent gun arm since he was last glimpsed in Batman v Superman.

Though the DCEU got off to a rocky start, 2017 could be the year all that changes. Wonder Woman’s solo movie is just a few months away and Justice League is looking to right the wrongs of the dour Dawn of Justice, primarily by injecting a sense of fun into proceedings. Check out the Comic Con preview footage if you don't believe me...

It's a sentiment director Zack Snyder reiterates. “One of the more rewarding aspects of creating Justice League was having fun exploring the dynamic between this diverse group of characters, inherently larger-than-life characters with disparate backgrounds, ethics and unique perspectives all trying to come together and work as a team,” Snyder says. “It not only offers an opportunity for great drama and complex relationships, but it also often results in great fun.

"It’s an exciting concept to explore and it only gets better when you add the component of our incredibly talented cast – their chemistry really adds to that dynamic.”

Only time will tell if Snyder and his cast can do the League justice.

For loads more movie interviews, features, and reviews, including exclusive previews of Ghost in the Shell, Logan, and Kong: Skull Island, pick up the new issue of Total Film magazine - on sale February 10.

Jordan is the Community Editor at SFX and Total Film. When he isn't watching movies or sci-fi shows of questionable quality he's probably shooting men in space or counting down the days till the next Zelda comes out.