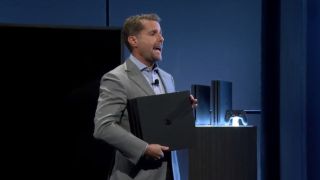 And scroll on for more highlights...

The higher-end console will shine on 4K TVs, but it also adds HDR support and enhanced graphical quality for HDTVs. It's coming on November 10 and will cost $399 / £349.

PS4 Slim got a price and a release date

All PS4s will get HDR support via an update

With a free PS4 HDR update coming, all you need is an HDR-compatible display.

Call of Duty: Infinite Warfare got some 4K gameplay

It's coming out a week before PS4 Pro, but Call of Duty: Infinite Warfare will have full support for the upgraded console when PS4 Pro arrives.

Mass Effect: Andromeda's enhanced HDR color range looks like it will be a marvelous way to see alien worlds.

Sony says it already has plans to update a half-dozen currently released games to make use of PS4 Pro's new hardware.

His mic wasn't on