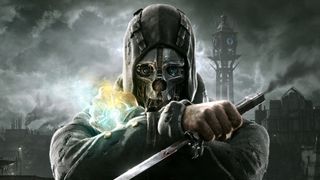 The Dishonored series has earned high marks from critics and players alike for its focus on worldbuilding and improvisational gameplay. Well, that and the fact it's just plain fun to be an assassin that also has magical powers. But don't expect Dishonored 3 anytime soon, or possibly at all - developer Arkane says that the series is on hold for the time being.

"I can’t say definitively what might happen down the road, anything could happen, but [Dishonored] is resting for now," Arkane lead designer Ricardo Bare told VG247 at QuakeCon 2018. "As far as pure immersive sims go, I don’t know if we’re going to continue to make like carbon copy...  this qualifies as an immersive sim and it’s the only thing we’re ever going to make."

Okay, so if not another Dishonored, what's next for the studio? While Bare wouldn't give out concrete details, he said that "some elements" of a cancelled project known as The Crossing could pop up. In that game, Arkane would have tried to fuse multiplayer with single-player, as modern-day soldiers clashed with a still-powerful Knights Templar. You can see a concept video of the game below:

"Being able to incorporate more online sharing or multiplayer type stuff, we totally might do that. It’s interesting because, for a while, there was this push with a bunch of big publishers to force teams to include multiplayer modes. I feel this was super destructive because you end up with a team that’s made a really compelling single-player game, but they were forced to tack on this deathmatch mode or whatever."

Bare also said that whatever's next from Arkane will feature a world that feels deep and real, as significant as the character you play, as well as a focus on freefrom, do-what-you-want gameplay, and probably (though not necessarily) played in first-person. In other words: anything. And that's pretty dang exciting, even if it's not Dishonored 3.

Dishonored isn't the only IP under Arkane's belt. The excellent Prey just received some pretty cool DLC in the form of Prey: Mooncrash. Check it out if you haven't already.