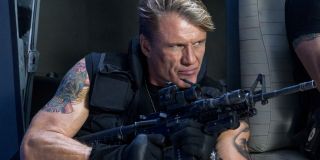 Since it emerged that Cable will be in Deadpool 2, plenty of actors have been linked with the time-travelling mutant. The latest to nominate himself for the role is Expendables star Dolph Lundgren, although his reasoning is a little suspect:

"I haven’t watched a lot of these superhero movies; for some reason, I don’t know, I’m just busy making films", Lundgren told Nerdist. "I did hear in… Deadpool, isn’t there a character named Cable that’s coming? Like, he’s a big guy? I guess I could kick some butt doing that, I suppose. We’ll see. When I saw the picture, he looks a little bit like Ivan Drago mixed with Gunner Jensen mixed with… I don’t know".

Lundgren is no stranger to the superhero genre - he played The Punisher back in the late 80's - and while he certainly looks the part, it doesn't sound like he's that passionate about the character. When you add that to the fact Lundgren's recent credits have almost entirely been straight-to-video fare, it becomes less likely that he'll end up a serious contender for the role.

Directed by Tim Miller and starring Ryan Reynolds, Deadpool 2 is yet to be assigned a release date.