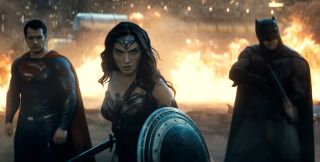 You might have noticed by now that comic book movies are full to the brim with little winks, nods, and Easter eggs about other superhero franchises but one eagle-eyed fan has spotted something Watchmen-related in Batman v Superman: Dawn of Justice that would make every DC fan’s head spin.

First posted on Reddit, this scene from the movie (which you can see below) involves Amy Adams’ Lois Lane doing some rummaging in her apartment but, if you squint, you’ll be able to see a very familiar yellow-and-black book lying horizontal on the shelf at the far right of the shot.

So, does the Watchmen comic exist in the DC Entertainment Universe or do the actual Watchmen exist as well? And if the comic exists then that must mean the Zack Snyder-directed adaptation exists but he’s also behind the camera filming Batman v Superman and… my brain hurts.

Joking aside, it’s always nice to see a Watchmen reference crop up from time to time, with the cult classic still proving as popular today as it was when it first hit the shelves in the late 1980s.

Are there any other Watchmen Easter eggs floating about? Let us know in the comments if you’ve seen any!