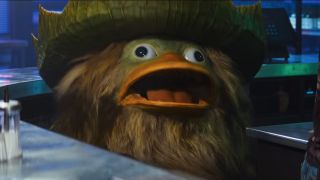 Detective Pikachu has scarily realistic Pokemon (have you SEEN that Mr. Mime?!) and while some of the Pokemon in the movie are obvious from the trailers, what about the Pokemon you may have missed? There's a number of fleeting appearances from various Pokemon in the Detective Pikachu trailers, that only the most avid Pokemon fan with the keenest eye will spot. Check out the first trailer here, then scroll down to see if you caught every Pokemon! Here's every Pokemon confirmed for Detective Pikachu so far, from all the trailers.

The opening scene for the very first trailer has a bunch of Pokemon to seek out. Flabébé is the first, floating in the air above the bustling street.

Also in the sky are a couple of Pidgey flying around. There's also an Emolga featured here, but we get a better look of it later on.

Down to ground level and walking towards the camera is a Charmander.

Right behind Charmander, walking in the opposite direction is a Dodrio.

Braviary can be seen for a brief moment perched on a ledge right before the shot cuts to the next Pokemon.

There's also a Bouffalant in the shot for a second, walking through the crowd of people.

Pictured on a sign high up on the buildings is a Victini face.

There's also a Wooper face a few buildings along from Victini, for a shop called Day Dream.

Mentioned only by name is Wynaut, right above the Wooper face.

On the same set of buildings is a sign featuring Petilil's face.

Advertising something "puffed" is a Swirlix with a blue outline instead of the usual pink hue.

The final Pokemon on the same set of buildings is a Goomy, created from some neon lights.

The first Pokemon you see in the next scene is Psyduck, stood next to Lucy.

Presumably during some sort of parade, there's an inflatable Gengar on the left side of the screen.

Further towards the back is an inflatable Jigglypuff.

When the protagonist - Tim Goodman - enters his room, Dragonite & Hypno are mentioned for an upcoming battle on a poster.

Charizard is pictured on a poster for the Cerulean Arena.

On the same wall is a poster for Articuno vs Steelix at the Johto Sport Club.

When Tim sits down on the bed, the poster behind him shows Zekrom and Reshiram duelling.

The next Pokemon we see is Detective Pikachu, voiced by Ryan Reynolds himself.

Next up is the market scene, with three Emolga sat on top of a stall.

Perusing a market stall is an Audino opposite the Emolga.

When the scene cuts back to the raised view of the market, there's a Venusaur ight next to Audino in the crowd.

On two different signs in the background are Unown; H on the left, K on the right.

On a noticeboard is a "Missing" poster for a Squirtle, last seen outside Oak Apartments.

Next to the Squirtle poster is also a missing Pancham poster.

When the shot cuts to the stream, there's eight Bulbasaur trotting through the water. A herd of Bulbasaur, perhaps?

Floating around the Bulbsaur is a bunch of Morelull too, like sentient mushrooms.

Jigglypuff is seen stood on a table in a bar, trying to wake a man it's sent to sleep by singing.

On the wall by Jigglypuff is another poster advertising a fight between Machamp and Primeape.

In the first shot of the fighting arena is Charizard, ready to breathe fire.

After that, you see three Greninja fly through the air and swipe at the camera.

When it cuts back to the arena, there's a Squirtle watching from behind the barrier.

Watching from the otherside is a Rufflet, next to Pikachu.

You get to see a "real" Pancham for a split second when the scene initially cuts to the arena, below Squirtle.

Mr. Mime is in the next scene... just look at that face.

We next see two Greninja running down a corridor firing some attacks.

Psyduck is shown a few times but this shot absolutely had to be included.

As did this one of Charizard about to eat Pikachu whole.

How many Pokemon did you spot in this trailer? Head on to the next page to see all of the Pokemon in the second official Detective Pikachu trailer.