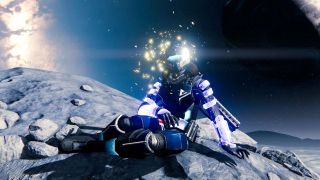 Destiny has some strange things going on in the build up to Rise of Iron. Currently Guardians are contracting a strange sparkly disease conveying various stat buffs. And it's spreading.

It happened to me last night when GR+'s exec ed Andy Hartup joined a raid I was doing and infected everyone with 'Splendour 2.6'.

I've been infected by the most fabulous virus in Destiny... #PS4share pic.twitter.com/TMgLPe04o7September 16, 2016

The entire fireteam seemed to pick it up and when I went back to the tower to cash in my engrams I seemed to pass it on to everyone there (I'm sure I was the only one to have it when I arrived).

So what the hell's going on? According to reddit a streamer who 'contracted' this sparkle pox a message was sent a message on Twitch from an account called Owl Sector, saying:

"We’ve detected an unidentified foreign intrusion into your systems, Guardian. Stay calm. We will investigate."

That's linked everything to this Owl Sector, part of a Bungie site measuring 'infection since initialisation'. It also has some dialogue transcripts for each of the five infections: Brilliance 3.2, Glory 2.1, Splendor 2.6, Magnificence 2.0 and Fortitude 3.1. Each with different buffs - Splendour 2.6 for example give you increased XP and reputation gains 'for the duration of the transmission'. Current thinking is that you can contract Sparkles (as I'm calling it) from random crucible kills or at the start of a strike. You can then pass it on to others.

The dialogue transcripts have some clues as to where this is all coming from. This quote suggests an origin: "A few Guardians in the field report being swarmed by some kind of electronic mite. The first few after visiting the Dust Palace on Mars, but the rest from all over". There's also this: "So what you're telling me is that an unknown substance or virus or curse is spreading among our Guardians", followed by "What protocols are the Owl Sector implementing?"

Elsewhere there's mention of a 'Dawn Calamity', a character called Quist (as well as Ikora and Cayde). Plus there's talk of quarantine and what should be done about the infection. It doesn't seem like the records of the disease point to anything bad. "Is happy shouting a medical issue?" say one of the reports.

So far that's as much as anyone knows, but with Rise of Iron days away it's likely this will either develop or resolve over the weekend. Either way, try and catch it and take advantage of the boosts while they last.