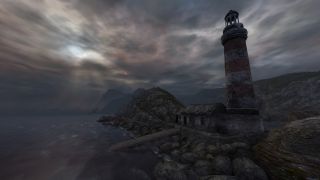 The popular indie exploration walking simulator Dear Esther is making its mobile debut on iOS devices sometime this year, says developer The Chinese Room. Originally released as a standalone title in 2012 on PC after evolving from a Half-Life 2 mod, Dear Esther was later ported to PS4 and Xbox One in 2016. Now fans will have the chance to explore Dear Esther's beautifully overcast Hebridean isle from the mobile convenience of their iPhones and iPads.

“Without Dear Esther, The Chinese Room perhaps wouldn’t exist, so to know that people will continue to explore the island in search of answers is incredibly fulfilling,” said Dan Pinchbeck from developer The Chinese Room. “iOS devices will offer an experience perhaps even more intimate and personal than when the game is played on a PC or a console, so I look forward to hearing how the game affects a new generation of players.”

Dear Esther puts you in the first-person perspective of an anonymous widower as he reads fragments of letters, which are unlocked each time you reach a new area, to his late wife. The story is explored through virtually zero actual gameplay, instead giving you the freedom to interpret the nebulous narrative by way of these letter fragments, which are different with each playthrough.

The first incarnation of Dear Esther was that of a Half-Life 2 mod made available all the way back in 2008. The game has grown rather successfully from its humble beginnings, to date selling over a million copies.

Dear Esther is also one of a handful of games that was recently announced to be joining the roster of available games via Origin Access, a PC-exclusive video game subscription service with a catalog of over 200 titles.

Our best iPhone games are perfect if you’re looking to kill time, boredom, or just want to sample the very best iOS has to offer.