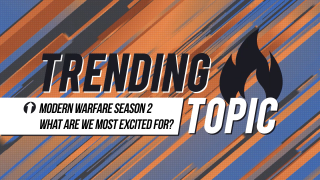 With Call of Duty: Modern Warfare Season 2 now live, the GamesRadar team has sat down to give their opinions on what they are most looking forward to from the new season.

With Season 2 officially available, we'll be able to experience new multiplayer maps, such as the classic 1v1 playground of Rust and the larger Atlas Superstore, alongside new maps for both Ground War and Gunfight. On top of that, new trials and multiplayer modes will be launching throughout the season.

In a press release, co-studio head of Infinity Ward, Patrick Kelly, said:  “The community response to Modern Warfare since launch has been incredible and we’re thrilled to bring back some legendary fan-favourite maps and an iconic beloved Modern Warfare character, Ghost.”

“We’re committed to continuously fuelling the fun with more and more content for everyone and can’t wait for players to experience what’s to come with Season Two.”

In our Call of Duty: Modern Warfare multiplayer review, Ford James noted how the competitive side of the game has (mostly) recaptured his love of the series. He wrote, "The core gameplay loop is the most satisfying Call of Duty has felt in years, and while it doesn't shine a light to how revolutionary the original Modern Warfare was in 2007, there's something about this revamp that simply works."

But what do you want to see from Modern Warfare Season 2? Either comment below or head to our Facebook and Twitter pages to let us know what new additions you're most excited for.