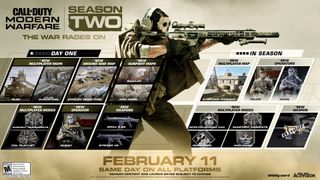 Call of Duty: Modern Warfare season 2 is upon us. The season will kick off on Tuesday, February 11 and continue to dish out new content in the weeks to come. After a leaked trailer spoiled some of the lineup early, Activision has now outlined everything coming this season. From multiplayer maps and modes to new guns and operatives, here's everything you need to know about Call of Duty: Modern Warfare season 2.

New maps are the headlining act of season 2, and the standout is the returning map Rust, a fan-favorite close-range map. Rust will be available on February 11 for standard multiplayer modes.

Rust will be joined by Atlas Superstore, another standard map coming on launch day. As you may have deduced, it's set in a big-old shopping warehouse, so you'll be doing some very literal laning.

The third day-one map is Zhokov Boneyard, a field strewn with airplane wreckage which is only for the Ground War mode. Gunfight mode is also getting a new map on day one of season 2: the Bazaar, which looks like a tight nest of alleys and choke points.

These maps will be followed by Khandor Hideout, another standard multiplayer map which is coming later in the season. Activision's kept quiet on when exactly this map will arrive and what it entails, but based on the name alone, we're expecting some tricky side routes.

Call of Duty: Modern Warfare is getting a handful of modes to go with its new maps, with two coming on launch day. Those are Gunfight Tournament, a limited-time mode which pits 32 teams of two against one another, and the Call of Duty League Ruleset Playlist, which mimics the settings, weapons, maps, and modes used in the Call of Duty esports league.

Three other modes have also been confirmed for later in the season, and Activision says players should expect more still. The other confirmed modes are:

Demolition: "Similar to Search and Destroy, this respawn mode pits two teams against each other with the objective of attacking or destroying bomb sites. The attacking team must destroy both bomb sites within the time limit to win the round. Decimating one bomb site adds to your time."

Infected Ground War: "Join up with your fellow Survivors to hold off the Infected horde until the time expires. Infected players will have limited loadouts but increased movement abilities, so be wary of their crafty play. If you do get infected, attack with the horde to assault and take down any remaining Survivors in a large-scale match of Infected."

NVG Reinforce: "Reinforce is a hybrid objective mode that blends elements of Domination with Search & Destroy."

A new season means a new battle pass, and the season 2 pass is bursting with free and paid content. Let's start with the two free weapons coming to all players this season: the Grau 5.56 assault rifle and Striker 45 SMG, which unlock at pass tier 15 and 31 respectively. Free players will also be able to earn up to 300 Call of Duty points (the battle pass costs 2,400), as well as miscellaneous cosmetics like weapon charms and calling cards.

Finally, Activision confirmed that more paid content will be released via the Modern Warfare store throughout the season, including two new Operators - Talon and Mace - as well as more blueprints and Operator skins. You can find more details here.