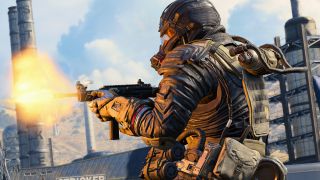 Call of Duty’s first attempt at a battle royale mode in Black Ops 4 has proven very successful for Treyarch so far, drawing PC players away from PUBG and dominating Twitch’s top games list. The concept of the game is the same as any other battle: be the last player standing, but the mode has a few differences to what players may be used to. One of these is the introduction of zombies. They’ve crossed the bridge from their designated gamemode to add a PvE element to Blackout. Black Ops 4 Blackout zombies can spawn in five different locations and alongside the undead horde is the famous Mystery Box, straight from Zombies mode. It works slightly differently in Blackout though, as rather than getting one random weapon from the box you’re guaranteed to get some level three armour, a decent weapon, ammo and some equipment. You need to slay all the zombies in the area first though! Be on the lookout for a Ray Gun too, because it can drop from any of the Zombies you kill.

You can tell where the Mystery Box is in your game by looking out for the enormous blue beam of light shooting up to the sky. Here are the five possible Black Ops 4 Blackout zombies spawn points for the Mystery Box and the undead - it can spawn at any two of these five at the start of the game.

N.B - It's worth noting that items you'll need to unlock specific Black Ops 4 Blackout Character Missions will only drop when taking out zombies, so this guide might come in handy for that.

The Asylum to the east of the map is an old Call of Duty: World At War map, and it was also used for a Zombies map in the same game, so it makes sense that the Mystery Box can spawn here. Beware though, as the area is fairly complex and compact it’s a hotspot for players diving down out of the chinook helicopters.

As for the Mystery Box itself, it spawns on the ground floor in a room in the north-east corner. As soon as you’ve killed all of the zombies roaming around the grounds, you’ll hear a sound cue indicating the box is unlocked.

South-east from the Asylum is an unnamed graveyard. Despite being unmarked on the map, it’s actually fairly large and has loot spawns on top of a number of graves and inside some of the tombs. The Mystery Box can also spawn here, and it’s a much easier place to kill zombies because you can see them from much further away since it’s so open.

We’re not sure if the spawn points have any weighting behind them, but we’ve found that this is one of the most common places for the Mystery Box to spawn - whether that’s luck or if it is more likely to spawn here isn’t confirmed. If it is at the graveyard, you’ll find it slap bang in the middle.

Moving west into the heart of the map and the next spawn point is at the smaller river village, south of Rivertown, where the northernmost building houses a boxing ring. The Mystery Box and accompanying brain-munching horde can spawn inside, with the box sat in the ring, squaring up for a scrap.

One thing to note with this location is that zombies can spawn outside of the building as well as inside, so if you’re wondering why the box hasn’t unlocked yet, check the outskirts. There’s a good chance you’ll find a few shambling about, but make sure you’re not shot in the back when killing the dopey zombies.

Right on the other side of the map is the next Black Ops 4 Blackout zombies spawn point. West of Array, at the end of the northern bridge coming from Nuketown Island is a roadside cafe and small garage. The box can spawn on the roof of the cafe, with zombies all around the pit stop. Slay them all, inside both buildings to open the box.

One cool thing about this location is that when you kill all the zombies, the jukebox inside the cafe starts playing some music. We’re not sure what the song is, but it’s pretty nifty. Sounds very much like one of the old easter egg songs from previous Zombies modes in older Treyarch titles, so it could be a reference to one of those.

The final possible spawn point is in the marked lighthouse in the south-west corner of the map. The Mystery Box itself spawns on the first floor of the red lighthouse, to the left of the spiral staircase, but you’ll find zombies everywhere. From the ground floor to the top, down on the pier and on the beach - they spawn all over.

A great way to approach this Mystery Box if it’s there at the start of your game, is to land right on the top floor of the lighthouse. We’ve found that there’s fewer zombies at the top, so you have more chance to find a gun before you have swarms of undead on you. If you do struggle to find a weapon, zombies take five melee hits each to go down.

Looking for more Blackout advice? Then visit our Call of Duty: Black Ops 4 Blackout map guide and learn what to expect from all 14 areas.