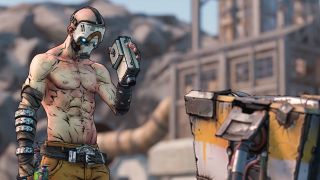 Sometimes, the stars align for casting directors, in the perfect marriage of actor and character that you can't even tell where reality ends and the fiction begins. Think Robert Downey Jr as Iron Man, Christoph Waltz as Hans Landa, Ice-T as a pink teddy with serious anger issues in Borderlands 3.

I'm dead serious; the rapper and famous gaming aficionado is making his first major game appearance in Gearbox's upcoming shooter, playing the role of BALEX - a navigation AI stuck in the body of a cuddly toy for... well, reasons. Borderlands 3's Creative Director Paul Sage, at a recent preview event, revealed to GamesRadar how the partnership came about.

Borderlands story recap: Catch up on the history of Pandora in time for Borderlands 3

"That's a great question!", jokes Sage. "Ice-T is a big gamer and I think he came out and one point saying he was a Borderlands fan, and then he and [Gearbox CEO] Randy Pitchford got in touch, and we asked him if he would be interested in voicing this character. He was killer in the studio and an awesome guy from everything else I know, so it's fantastic to have him."

And, I cannot overstate this, Ice-T is genuinely brilliant in the role; funny, enthused, and a perfect match for Gearbox's flamboyant script. BALEX isn't just another voice in your ear, though, during our preview on one of Borderlands 3's new planets, Eden-6, the sentient teddy bear found his way into an armoured mech, and fought alongside us through one of the game's many new dungeons.

Hopefully BALEX is just one of several fresh faces to expand out Borderlands already extensive roster of NPCs, alongside a bunch of returning heroes from previous games, as Sage promises Gearbox is holding back certain character reveals for players once they get their hands on the game come September 13. Still, what can beat Ice-T?

For more, check out the first 14 minutes of Borderlands 3 opening gameplay, or watch our Release Radar below for a guide to everything else out this week.