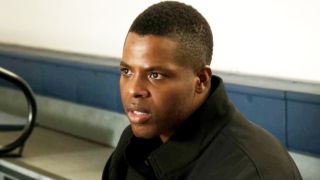 Filming on Marvel's Black Panther - which will be helmed by Fruitvale Station and Creed director Ryan Coogler - will start early next year, and slowly but surely the pieces are falling into place. While Michael B. Jordan has already been confirmed to play the villainous Erik Killmonger, he won't be the only threat to Chadwick Boseman's King T'Challa in the movie.

According to Variety, Person of Interest alumni Winston Duke is being tapped to play M'Baku, also known as Man-Ape. In the comics M'Baku is one of Wakanda's greatest warriors in addition to being one of T'Challa's biggest rivals, often plotting to usurp the throne and move the African nation away from technology.

Whether Man-Ape will have his own agenda or be working with Killmonger in the movie is unclear but as far as secondary villains go he's a solid choice, and while this will be Duke's first feature film role Marvel have a very good track record when it comes to casting.

Whether it's confirmation that Andy Serkis will be reprising the role of Ulysses Klaue or otherwise, we can probably expect a few more Black Panther casting announcements in the next few months before production begins.

Directed by Ryan Coogler and starring Chadwick Boseman, Lupita Nyong'o, Michael B. Jordan, Danai Gurira, and Winston Duke, Black Panther is released in UK cinemas on February 9, 2018 before opening in US theatres on February 16, 2018.